Read the opening of Bonny & Read by Julie Walker

It has been a filthy hot day, the night following suit. The sluggish silence is shattered by the sounds of a loud argument at the Cor- mac house. Moments later, to the music of breaking glass, Anne tears from the French windows, skirts bunched in her hands, long red hair streaming behind her as she races like a March hare across the lawn, the sounds of pistol fire ringing in her ears as she runs full pelt for her life, ragged-breathed and laughing as vitriolic obscenities are hurled at her.

Her father, the source of the fury, takes repeated drunken aim at the darting figure from the open doors, his only child, thank God, married without his knowledge or blessing earlier that day. And to a servant, of all things, this lesser person running in the wake of his dashing bride, sheer panic on his face as the gunfire continues, a hand held to his bleeding arm, where, against all odds, one of his father-in-law’s bullets has glanced its target.

This is typical of James Bonny’s luck – something that his new wife will know soon enough. But for now she feels the exhilaration of chaos, the proximity of death, and the freedom of being Anne Cormac no longer.

‘You whore! You are your mother’s daughter, and none of mine!’ Her father’s aim is not helped by a brandy-soaked afternoon and the insult of sudden betrayal, as he screams things to the running figure that a father should never utter to his only girl, things to terrify a man like James Bonny.

‘You think you’ll get away so easily?’

There are torches close behind, the smell of cordite in their nostrils, the thick air catching at their throats as they run, the cushioning grass soon giving way to the sharpness of parched soil as they reach the boundary wall.

The roused servants have let loose the dogs, thinking perhaps that their master has disturbed thieves in the act, and the fugitives hear their snarling pursuit, drummed up by the mad excitement of William Cormac, who agitates the men and beasts to do them great harm.

The dogs are fast and are already snapping at James Bonny’s ankles as he frantically tries to climb beyond their reach, while Anne is halfway over the wall using a creeper that she has climbed since she was a child, her underthings on shameful view for all to see. After everything he has endured, it is almost her father’s undoing. He falls to his knees, holding up his hands to the heavens and wailing:

‘And will you show your arse to the world too?’

She hauls herself to the summit eight feet from the ground and salutes her father with the requisite number of fingers before swinging her legs over to the other side and, using the overhang- ing creeper, drops, landing unscathed and unladylike onto the road beyond. She is soon joined by a breathless and sweating James, who falls like bad fruit beside her, his eyes wide at the raw memory of recent insults to his person.

‘You smell worse than the dogs, James Bonny!’

Her eyes are dancing, her face burning from her exertions, but he does not appreciate the joke. He had not realised when they married this morning that she was clearly quite mad.

‘So that was your idea of breaking it to him gently, was it?

He holds out the limb in question to show her the scratch and suggestion of blood, already dried.

‘Sure enough, it wasn’t your arm I was worried about.’ Her glance and filthy smile suggest a softer target, and he rests his hands there to protect his treasures. ‘Besides, it was broken as gen- tly as it needed to be, for we don’t need his money now that we have each other.’

James’s look suggests otherwise and she sees it at once. Her smile hardens; a hardness that will be difficult to shift. He will not be the man to do it.

But at that moment the shouts of men and yelping of dogs on the other side of the gate grow louder at the unmistakable sound of a key turning in the lock.

‘We’re not clear of this place yet. You’d better hope for your sake that you have breath left in you.’

Anne hops from one foot to another, pulling stained satin slippers from her feet, before she sets to running again in earnest, throwing the shoes behind her into a ditch.

It is only when they are lost in the chaos of the port, breath slow- ing and sweat flowing freely, that they are able to slow down, sure now that they are not being followed.

James looks at his new bride without affection as she takes stock of this new situation.

‘And what will become of us now? There is no money since you have ruined everything …’

Anne doesn’t listen to him finish – there is no need. He has killed her infatuation dead, and all that is left behind is the inconvenience of legal obligation. That she has saddled herself with a man like James Bonny, she will have time and cause enough to regret, but for now there is the immediate future to consider.

It is inconceivable that the affair has gone sour after so promising a start. Stolen glances across a neighbour’s drawing room; he forward and insolent for a mere servant. As the men retired for drinks, Anne had entertained herself with the footman with the indecent smile. The velvet uniform had suited him, though he looked better out of it; he had not been shy, and nor was she. He had bundled her into a cupboard only a week back with whispered promises, warm breath and lips upon her face and warmer fingers beneath her skirts, urgent and eager. In her haste to leave home, and their mutual delusions about the other, Cupid had smiled upon them.

But in the few short hours that they have been joined in the eyes of God, Anne has found her husband disappointing in more ways than one. He is less exciting than she had expected; it’s clear that their escape has been more terrifying than exhilarating to him. He is far less appealing now that the smiles and flattery have stopped. It is unfortunate that he is also more stupid than she had hoped.

That he has managed to disappoint her in such a short space of time amazes her; that she is not the rich prize he hoped for amazes him. They are well matched, indeed.

James is still waiting for an answer, his face red from exertion and temper, while Anne is pricked by feelings of dislike.

‘We shall go to sea, then. You’ll get work soon enough, but after today it won’t be here.’

She will remember later how full of hope she still is, and curse herself for it. But here and now, their passage on the merchant ship is bought in exchange for the gold cross and chain Anne had worn for her wedding that morning. It had been stolen especially from her mother’s jewellery box as she slept off her daily dose of laudanum, prescribed to cure her of sadness. It is an affliction Mrs Cormac has suffered from since she met Anne’s father, and will hardly improve now.

The ship is handsome against the horizon, ripe with promise. All ties with family, home and propriety now severed, Anne climbs the gangplank with great hopes for New Providence, the jewel of the Bahamas, she hopes. James follows sullenly in her wake. 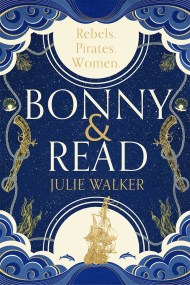 'A cracking read. . . Fascinating, complex characters and a real page-turner!'
LIZ HYDER, author of THE GIFTS

'Bonny and Read has it all. Adventure, atmosphere, sizzling suspense and unforgettable characters. Such a brilliant debut!'
SD SYKES, author of THE GOOD DEATH

'A deftly told tale of the complexities of friendship, female identity & freedom, featuring two remarkable women determined to define their own destinies . . . the pages turn themselves'
ANITA FRANK, author of THE LOST ONES

'What a debut! A fabulous, dangerous sea-shanty of a story'
KATIE MUNNIK, author of THE AERIALISTS

'A wonderful story, so beautifully told and absolutely gripping to the very end'
EMMA CARROLL

Caribbean, 1720. Two extraordinary women are on the run - from their pasts, from the British Navy and the threat of execution, and from the destiny that fate has written for them.

Plantation owner's daughter, runaway wife, pirate - Anne Bonny has forged her own story in a man's world. But when she is involved in the capture of a British merchant ship, she is amazed to find another woman amongst the crew, with a history as unconventional as her own. Dressed as a boy from childhood, Mary Read has been a soldier, a sailor, a widow - but never a woman in charge of her own destiny.

As their exhilarating, tumultuous exploits find fame, the ballad of Bonny and Read is sung from shore to shore - but when you swim against the tide of history, freedom is a dangerous thing...

An exuberant reimagining of the extraordinary story of Bonny & Read - trailblazing, boundary-defying, swashbuckling heroines whose story deserves to be known. Perfect for fans of Ariadne, The Mercies and The Familiars.