The Prime Minster’s Affair by Andrew Williams is out now!

‘I’ll come straight to the point,’ she said, ‘the Prime Minister was a very poor man, now he’s got the whole Treasury of Great Britain behind him.’ Her intention was clear: blackmail. The Prime Minister was an innocent, she observed to his intermediary, he had written her ‘pornographic’ letters. Well, now he had a choice: pay up or their affair would ‘blaze’ in the press.

Lest there be any doubt, the innocent in question was not the current occupant of Number 10 but Labour’s Ramsay MacDonald in 1929.

There have been fifty-five Prime Ministers since George I appointed Robert Walpole First Lord of the Treasury in 1721. Many have entertained mistresses, perhaps most – Number 10 has been home to notorious philanderers – but solid Scots family man, Ramsay MacDonald wasn’t one of them. Within months of taking office his government was hit by the shock of the Wall Street crash and a world economic crisis. Still handsome at 63, with wavy grey hair, a thick moustache and dark brown eyes, his beloved wife, Margaret had died 18 years before, and he had brought up his four children alone. There had been other women, notably a secret fifteen-year affair with another Margaret, a poet, society beauty, and daughter of an earl. Their love had foundered on the rock of his political ambition, on fear that the newspapers would make great sport of the illegitimate son of a ploughboy carrying on with an aristocrat.

But at some point in the late 1920’s MacDonald met a Viennese woman called Frau Forster, ‘a faded blonde, very sophisticated, very agreeable,’ according to his friend Sir Oswald Mosley. Notorious later as the leader of Britain’s fascists, Mosley and his wife, Cynthia, were prominent Labour Party supporters at the time, and on the eve of the 1929 General Election MacDonald invited them to join him and his ‘little Austrian friend’ at a hotel in Cornwall for a ‘gay party’.

By the autumn of 1929 the love affair was over. Ramsay Mac was in Number 10, Mosley was at the Treasury, and Labour was in power but without a majority in parliament. Spurned but still in London, Frau Forster seems to have fallen on hard times. According to Mosley, she contacted him to request a meeting, and she warned him that the government was in danger of falling. He quickly realised that it was Frau Forster herself who posed the threat to her former lover’s premiership.

She had visited Number 10 already, she claimed, and when she asked him for money he had lost control, banging his head against a wall in the Cabinet Room. Then he had taken her by the shoulders and thrown her into Downing Street. Mosley said he was shocked and she should understand that the Prime Minister was overworked and under terrible strain. But Frau Forster wasn’t interested in excuses; she had letters and she was willing to sell them. What was MacDonald to do? ‘We have implacable enemies who sleeplessly lie in wait to damage our reputation,’ he confided to his diary. Should he meet her blackmail demand? Who could he trust to retrieve the letters? That is the stuff of The Prime Minister’s Affair. 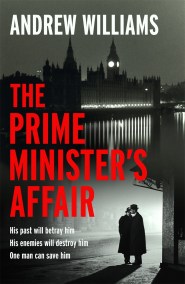 A compelling story of power, passion and intrigue based on real events, The Prime Minister's Affair is a terrific read - Nick Robinson, Presenter, BBC Today programme


London 1929. Very much not a land fit for heroes. Frenchie knows his occasional work for MI5 serves only the ruling classes. But he needs to feed his children. Scruples died in the trenches.

When Ramsay MacDonald, Britain's first Labour Prime Minister, is blackmailed by a former lover, Frenchie must go to Paris to buy her silence.

It is clear there are many people who would see MacDonald fall - the Conservatives, their friends in the press, even some of his own colleagues. But his own secret service? When Frenchie hears the other side of the story, everything changes.

The Prime Minister's Affair is another brilliant historical thriller from the author of Witchfinder, based on a real blackmail plot, hidden in the shadows.

'If le Carre needs a successor, Williams has all the equipment for the role' Times Literary Supplement Books of the Year

'Spy tradecraft of the old school, with no computers, fast cars or mobile phones, but not a whit less exciting for that. Highly recommended as both a spy story and a piece of social and political history' Shots Magazine