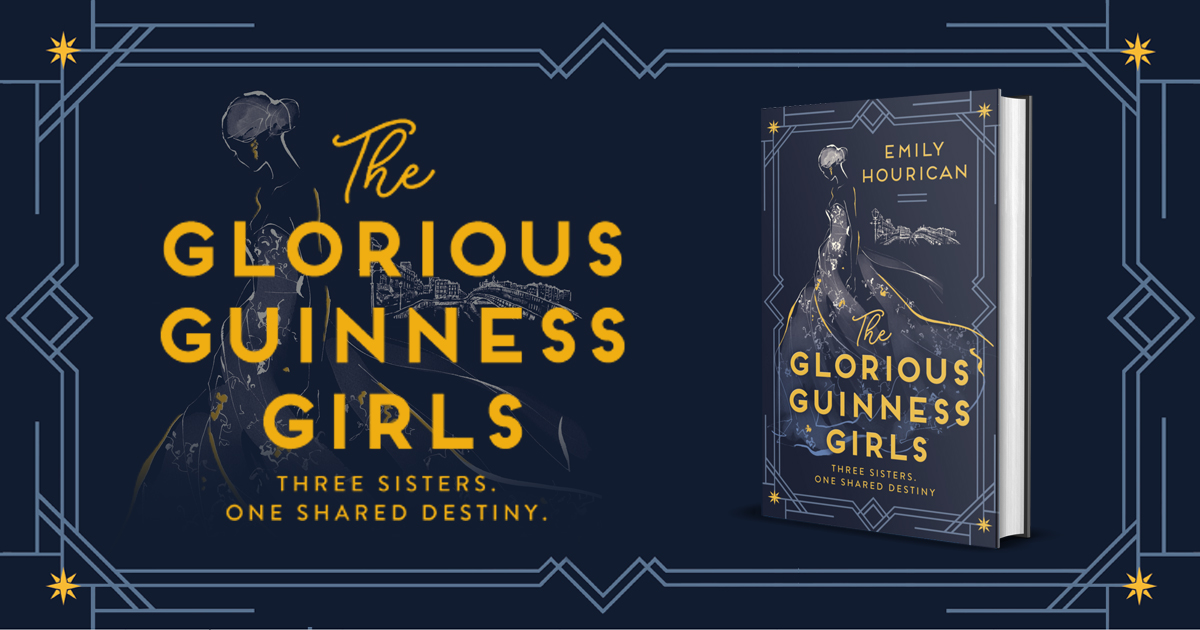 Set amid the turmoil of the Irish Civil War and the brittle glamour of 1920s London, The Glorious Guinness Girls is inspired by one of the most fascinating family dynasties in the world – an unforgettable novel of reckless youth, family loyalty and destiny.

Here, author Emily Hourican talks about her inspiration for writing the novel.

Years ago, in the house where I grew up, in Brussels, I was introduced to a man called Garech who had a flowing beard and wore clothes that were a mix of tweedy gentleman and Irish fisherman. He was, I was told, a musician and founder of a record label that specialised in traditional Irish music, and a great champion of Irish crafts.

Later, I was told that he was a son of Oonagh Guinness.

That was probably the first time I realised that Guinness wasn’t just a drink, but a person too. Or rather, many people. There are so many Guinnesses. It’s a name that crops up again and again, in Ireland and the UK. In business, obviously, but also history books and social diaries, attached to houses – many of our State buildings, including the Irish embassy in London, were once homes of various Guinnesses – associated with politics, horses, fashion and the arts.

When I came to university in Dublin, I met people who had gone to parties at a house called Luggala, about an hour’s drive from Dublin, set in a beautiful valley surrounded by mountains and, laid out in front of it like a carpet, a lake of water coloured black by peat so that it looked for all the world like a spilled pint of Guinness.

Those parties – famous for the informal generosity of their hospitality – were thrown by Oonagh Guinness. They were full of artists, writers, poets and playwrights. They rambled on across nights and days, with people, so I was told, falling asleep on sofas and mattresses, in the middle of heated cultural discussions, only for them to wake, have a Champagne cocktail, and pick up exactly where they had left off.

Others I met had been to parties given by Oonagh’s older sister Aileen in a castle called Luttrelstown that sits in lush green acres on the north of Dublin. These were more horsey, it seemed – timed to coincide with race meetings and the Dublin Horse Show. Aileen’s guests were celebrities, aristos and the jet-set (Hollywood actors and international playboys). At Luttrelstown, there was always the chance of an apple-pie bed, or a bucket of water balanced on the door-jam of one’s bedroom but that, apparently, was nothing compared to the hi-jinks favoured by the middle sister, Maureen, who had a fake nose in the shape of a penis, and liked to dress as a kind of slovenly maid and sidle up to male guests to her house and ask if they wanted ‘to go, sir’ while leering in the direction of the lavatory.

I liked the sound of these Guinnesses. I have sisters – two as it happens (and some brothers), and I have always been fascinated by the bond – close, competitive, loyal, loving, infuriated – that exists between sisters. In later years, after I became a journalist, I wrote about the Guinness Girls many times. About their privileged background – the daughters of one of the wealthiest men in Ireland and the UK – and also the tragedies that they endured. I loved the historical background to their lives – they grew up in Ireland during the War of Independence and the Civil War, then moved to London when their father, Ernest, decided it was no longer safe for them to stay, despite the fact that as a Guinness, he was one of the best employers in the country. Once they got to London, in 1924, they landed straight into the society of the time – the Bright Young People of post-war England, going to parties with Diana Mitford and the Prince of Wales – partying on through the ‘Devil’s Decade’ of the 1930s when unemployment was at a shocking high and fascism was on the rise even in the UK, into the years of the Second World War and on into the 1950s and 60s, curiously untouched by the realities of the changing world around them. They were insulated by their money, but also by their attitude – a kind of childish devotion to fun and frivolity. They married, then married again (and sometimes again; eight husbands between them), had children, watched children die tragically, and lived to ripe old ages. Aileen, the last to die in 1999, was 95.

In everything I found out about them, these Guinness girls seemed at once real people but also characters in my favourite novels by Evelyn Waugh and Nancy Mitford.

In fact I have told the story through a character I created – Fliss, who is sent to live with the Guinnesses when she is 11 and they are almost the same age. She watches them grow up, become women, fall in love, get married and far more. She knows them like no one else does. Telling the story like this allows me perspective and an outsiders view into the lavish world the girls inhabit. Having Fliss as the eyes and ears means the girls are free to be themselves, without having to tell the story. Fliss does that for them.

Authors of historical fiction are always saying how much they loved the research. I’m not sure I ever believed them – it sounded a bit like my history degree – until I began work on this book. Now, I’ve joined their ranks. I loved researching this. Every bit of it. The hard part was stopping researching and starting writing.

This is a work of fiction. There are characters based on real people, and there are invented characters, but all are part of a fictional landscape. Fliss is a completely invented character, as are Hughie and Richard. The girls – Aileen, Maureen and Oonagh – were real people, of course, as were their parents, their husbands, their many cousins and so on. But the characters in this book are my versions of these people. They aren’t the Guinnesses; they are characters based on what I know of them, fleshed out with things I have invented.

I have stuck closely to the details of the girls’ lives, and woven my story around specific historic moments. The challenge was to plot a story that took in these moments and made sense of them – a kind of join-the-dots, with fiction weaving in and out of fixed historical points. By and large, I’ve been faithful to the time and dates of these events – I think it’s much less fun if one ‘cheats’. The result? A novel about real people, using things that did happen, to tell a story I have invented.