The Communist’s Daughter is the story of Katia, a young woman has grown up amongst the ruins of the once mighty Berlin, now shattered by Allied bombs. In their tiny, freezing flat, Katia’s father teaches her of the righteousness of the new Soviet republic, who will always keep watch over them. A chance encounter with a man from the west causes Katia to realise there might be more to life on the other side of the wall. But blinded by the first blush of love, she fails to understand that it’s not what lies ahead, but what she will leave behind.

The novel was first published in Spain, where it won the Premio Ojo Crítico for best fiction of the year along with numerous accolades and praise. Tinder Press have just published the novel in English for the first time, translated by Katie Whittemore. Here, Katie talks to author Aroa Moreno Durán about the origin of the story, her research for it and the experience of being translated.

KW: Tell us about the seed for the story in The Communist’s Daughter.

AMD: I came across this story by chance and couldn’t say no; the story was just asking to be told. I’m also a journalist, and when I was on an unrelated assignment, someone mentioned a story about Spaniards in the GDR. No one had ever really written about the Spanish exiles who made their lives in Communist Germany following the Spanish Civil war. My reporter’s antennae perked right up and led me to it, that feeling you get when you come across a story that hasn’t been told before. I was immediately drawn in: it was about exile – a topic that has always interested me – about people being displaced and questions of identity, and to top it off, it took place in Berlin, a city I had recently visited and where I wished to set a novel, but I had no idea how I was going to approach it.

I dove in with some superficial searches online and I could hardly find anything. Just a few speculative stories, a couple of reports. So, I started writing, feeling it out, without really knowing if what I was doing had a historical basis, or was pure fiction. It was easy, in the beginning, because Katia and her family live inside a flat. Almost all the early scenes take place in the home. Katia is a child, she’s little. But as soon as I took her out into Berlin, I realized I had a big job ahead of me and was going to have to do extensive research. I was writing about a historical moment, about a country that is not my own, and moreover, the GDR and East Berlin no longer exist; Germany hasn’t been communist for a long time.

KW: How did you balance creating the fictional world for Katia and her family with the extensive research that you surely must have had to undertake for a historical novel?

AMD: Well, it was complicated because all the source documents were in German. I speak German, but my language skills are rusty, and understanding the primary sources is more complex than having a conversation or reading a novel. I read everything I could about what took place in the city. I watched films and documentaries. I was slowly building my Berlin, Katia’s Berlin. I traveled to Berlin several times while writing the book. The first time, I went to situate the map of the city in my head. And later, I was lucky enough to meet some women who were daughters of Spanish exiles, who had lived in circumstances similar to Katia’s. They were incredibly generous with stories about their families, people who survived the Spanish Civil War, went into exile, and arrived in Germany when the Second World War was almost over. They saw the beginning of the Cold War and the building of the Wall. I was so curious about how someone who was not from there, not a Berliner, would have experienced the division of the city, its cutting in two.

KW: In translating this novel, I was particularly challenged by the subtle way you portray Katia’s motivations, as well as her disappointments. Without giving too much away, can you speak a bit about how you went about building Katia’s character and the crises she experiences as a mother, wife, and daughter?

AMD: I used to think it was a figure of speech when writers said their characters escaped them and did things they didn’t want them to. I used to think that characters were very obedient. But the novel itself revealed something to me: Katia was repeating her mother’s role. Her mother followed her father, a Communist, to Berlin, and suddenly found herself in a society unlike her own; she doesn’t know the language, she sees herself as different from her daughters. And this same thing will happen to Katia when she crosses the Wall with Johannes and becomes a wife and mother. Katia’s crisis is not just one of marriage and motherhood – she’s also dealing with a pretty strong identity crisis, the crisis the world faced during the Cold War: communism or capitalism.

It is worth remembering that – although the GDR was a dictatorship – communism was clear on the role of women in building the republic: they had to be workers. It wasn’t the feminism we know today, the feminism of equality, but there, they were equal as workers. How did they get women into the labour force? By facilitating all sorts of subsidies for childcare, free daycare from day one, the inclusion of women in higher education at rates that really weren’t seen again until now. It was at 50%. That wasn’t happening anywhere else in the world at the time. Katia, after being raised in that Soviet educational system, is transplanted to a place where she is received with paternalism, which is how people from the East were often received in West Germany, with condescension, with ‘don’t you worry, because we have everything here’: everything material, that is. I don’t want to give the novel away, but Katia suffers terrible unhappiness on the other side, finding herself on her own.

KW: The Communist’s Daughter has also been translated into Italian, French, Portuguese, Germany, Dutch . . . This is quite a remarkable number of translations for a first novel, and a literary novel at that.

AMD: Well, I’d like to think that Katia’s story resonates across borders, though it is a very particular story narrated in a very personal way. Exile, political repression, immigration are subjects that are very much still alive. I think they form some of the biggest dramas of the twenty-first century: refugees, people who flee their homes because they’re hungry, because of violence, political reasons, war, or because they want a better life. Katia’s story reminds us that we form part of a common history. 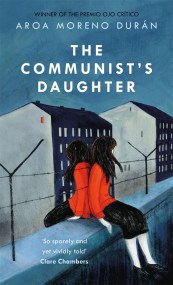 '[I was] completely transported . . . so sparely and yet vividly told' Clare Chambers


Winner of the Premio Ojo Crítico

Katia has grown up amongst the ruins of the once mighty Berlin, now shattered by Allied bombs. In their tiny, freezing flat, Katia's father teaches her of the righteousness of the new Soviet republic, who will always keep watch over them.

As a young woman, a chance encounter with a man from the west causes Katia to realise there might be more to life on the other side of the wall. But blinded by the first blush of love, she fails to understand that it's not what lies ahead, but what she will leave behind.

Translated from its original Spanish, The Communist's Daughter is a spare and exquisite novel that depicts twentieth century Europe through one family's tragic story.