Little Charlotte was sleeping in her crib in the bedroom while Edward and Vivian listened to The Chase and Sanborn Hour on the radio. They always listened to the program to hear Edgar Bergen and his dummy, Charlie McCarthy, crack jokes. At exactly 8:12 p.m. there was a musical break in the program and, like he always did, Edward switched the radio dial from NBC to CBS to see what else was on.

“I don’t know why you can’t just enjoy the music until they come back on,” Vivian groused, knitting needles clicking as she made some red booties for Charlotte. She didn’t say it every time, but often enough that it got on Edward’s nerves.

He ignored her and turned up the volume:

Ladies and gentlemen, I have just been handed a message that came in from Grover’s Mill by telephone. Just one moment, please. At least forty people, including six state troopers, lie dead in a field east of the village of Grover’s Mill, their bodies burned and distorted beyond all possible recognition.

Edward shushed her, waving his hand in a downward motion. The announcement continued and Vivian and Edward stayed glued to the broadcast as several radio announcers described the horrifying attack unfolding at Grover’s Mill, which Edward finally whispered was “in New Jersey.”

Ladies and gentlemen, I have a grave announcement to make. Incredible as it may seem, both the observations of science and the evidence of our eyes lead to the inescapable assumption that those strange beings who landed in the Jersey farmlands tonight are the vanguard of an invading army from the planet Mars. The battle which took place tonight at Grover’s Mill has ended in one of the most startling defeats ever suffered by any army in modern times; seven thousand men armed with rifles and machine guns pitted against a single fighting machine of the invaders from Mars. One hundred and twenty known survivors. The rest strewn over the battle area from Grover’s Mill to Plainsboro, crushed and trampled to death under the metal feet of the monster, or burned to cinders by its heat ray. The monster is now in control of the middle section of New Jersey and has effectively cut the state through its center. Communication lines are down from Pennsylvania to the Atlantic Ocean.

Edward and Vivian looked at each other. Edward hadn’t wanted to install a telephone in the house because of the expense, and the fact that he didn’t see the need.

“Well,” Vivian began slowly, trying to keep the panic from rising in her throat as she laid the knitting needles, yarn, and booties aside, “we can’t check the telephone to see if that is true because we don’t have a telephone. We won’t know if the lines are down.”

The threat suddenly seemed very real. They were just a couple of hours from New Jersey. Edward pushed up from his chair and swiftly made his way around the small house, locking the windows,
yanking down the window shades, and then double checking the locks on the front and back doors. Vivian had gone to the bedroom and gathered Charlotte up in her blanket, peeking at the tiny face to make sure nothing was wrong with her.

“Get to the cellar,” Edward ordered, before switching off the light in the living room, and following her down the steps. He went to the wall shelf of the chilly cellar where he kept some of his tools and the small portable radio. He switched the volume on and tuned the dial until the alert came in. They spent the next twenty minutes silent and shivering in the dank cellar of the little house, listening to the developments of the Martian attack. Vivian sat rigidly on Edward’s wooden workbench, rocking Charlotte against her and anxiously bouncing a crossed leg while shooting hostile glares at Edward about the telephone. As the broadcast blared on, the frantic tone of the announcer lessened and then there was a swell of music. Orson Welles introduced himself over the radio waves, his deep voice filling the damp cellar. The high- strung description of the attack had ended and now Orson Welles was talking about Halloween. Edward and Vivian stared at the little portable radio, confused, until they heard:

You are listening to a CBS presentation of Orson Welles and the Mercury Theatre on the Air in an original dramatization of The War of the Worlds by H. G. Wells. The performance will continue after a brief intermission. This is the Columbia Broadcasting System.

“Oh!” Vivian and Edward exclaimed at the same time as they looked from the radio to each other, startled. Edward was the first to laugh. He was the only one to laugh. Vivian said, “Oh!” a few more times, and then, “Well . . .” Then Charlotte began to cry, and Vivian snapped. She marched straight over to the radio and switched it off in a violent motion.

“Well, of all the . . .” Vivian clutched the crying Charlotte to her as she stomped up the steps into the kitchen, with Edward trailing behind. She marched to the middle of the living room and stood there not knowing what to do next, and bouncing Charlotte in an attempt to stop her crying. She could not believe they’d just spent all that time in the cellar fearing a Martian attack, when it was
just a stupid story. It had sounded so real.

“Here.” Edward reached out his arms for the baby.

“I hate to be made a fool of!” Vivian spat while stubbornly clinging to the wailing bundle.

She huffed, pushed the baby into his arms, and stomped to the back door, unlocking it and flinging the door open for some fresh air. The smell of burning leaves still hung there as she looked up
into the moonless sky, tapping her toe in irritation, almost daring a Martian spaceship to appear. She heard the snapping of twigs and froze in place, her eyes following the sound to the shrubbery
that bordered the far corner of the yard.

“Edward.” It came out in a whisper. Her voice felt pushed down inside her chest, like something was pressing on it to keep it from escaping. Her fingers squeezed the doorknob and she took
a deep breath.

The shriek brought Edward running from the living room, clutching the still- crying Charlotte to his chest.

“There’s something out there in the bushes!” she hiss-whispered to him as he pulled her back into the house with his free arm. He handed Charlotte back to her, and then stepped over the threshold onto the back porch, and then a few more steps out into the yard, squinting at the area she had pointed to. He stood stock- still for a full minute, staring at the shrubbery. The bushes remained still, and the only sound to be heard was the chirping of a few late- season crickets.

“Viv.” He turned to face her. “It might be the Martians, so we’ll just keep the door closed and locked.”

Edward had rebounded from the earlier scare a lot quicker than Vivian had and she didn’t appreciate it one bit. She scowled at him as he walked back into the house, closed the door behind him, and shifted the lock into place.

“I know I saw something.”

He pulled her close to him and planted a kiss on her cheek.

“Who’s afraid of the Big Bad Wolf,” he sang.

“Yeah, you weren’t so brave when you thought the Martians were coming,” she muttered under her breath as she walked back to their bedroom to put Charlotte in her crib, where she instantly
stopped crying. Vivian was secretly glad they’d both been fooled by the broadcast, because that was just the kind of thing he liked to tease her about. But, there you had it. Her husband was just as
gullible as she was. As she sat on that thought, she considered it might not be such a good thing. 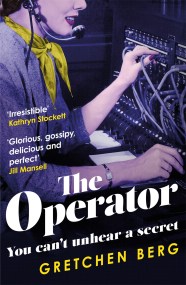 'What if you could listen in on any phone conversation in town? Irresistible!'
Kathryn Stockett, bestselling author of THE HELP

'Glorious, gossipy, delicious and perfect'
Jill Mansell, bestselling author of AND NOW YOU'RE BACK

* 'Unique and quirky . . . You will definitely see Vivian and co. in your mind's eye!' THE BOOKTRAIL
* 'Moving and ultimately uplifting . . . A wonderful novel' JO'S BOOK BLOG
* 'The small town feeling is portrayed really well . . . Great' SHORT BOOK AND SCRIBES
* 'A joy to read . . . Wonderful, witty, intriguing and heart-felt' EMMA'S BIBLIO TREASURES
* 'Delightfully written and cleverly woven. I enjoyed getting to know all the characters and learning their secrets' LOCKY LOVES BOOKS</FONT>

It's 1952. The switchboard operators in Wooster, Ohio, love nothing more than to eavesdrop on their neighbours' conversations, and gossip about what they learn. Vivian Dalton is no different (despite her teenage daughter's disapproval), and always longs to hear something scandalous. But on the night of December 15th, she wishes she hadn't. The secret that's shared by a stranger on the line threatens to rip the rug of Vivian's life from under her.

Vivian may be mortified, but she's not going to take this lying down. She wants the truth, no matter how painful it may be. But one secret tends to lead to another . . .

This moving, heart-felt and ultimately uplifting novel brilliantly weaves together an irresistible portrayal of a town buzzing with scandal, and an unforgettable story of marriage, motherhood and the unbreakable ties of family.

'Funny, sweet, secretive, and full of fascinating 1930s, 40s, and 50s period details... a poignant look at life in a small town with its nosy neighbors, thorny families, imperfect romances, scandalous pasts, and gratifyingly just deserts' Laurie Frankel, bestselling author of THIS IS HOW IT ALWAYS IS