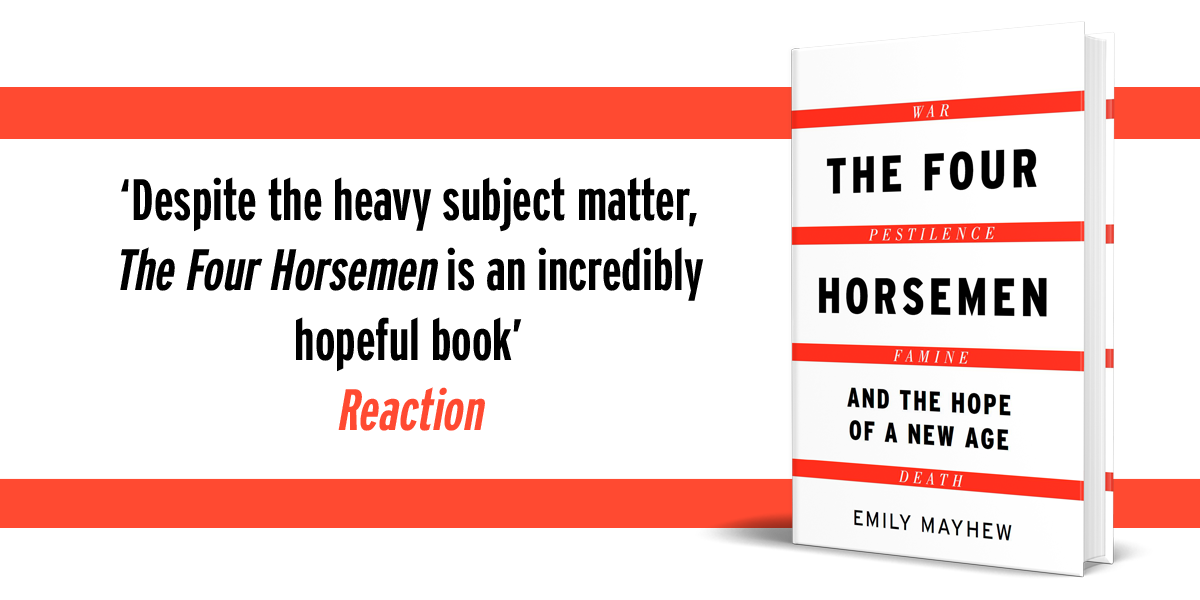 Today on the blog, we have author Emily Mayhew with us. Emily talks about how she simply started writing about people facing extraordinary challenges around the world, and how that developed into her upcoming book The Four Horsemen and the Hope of a New Age.

The four most famous Horsemen have ridden across our world for thousands of years and are with us still. I didn’t set out to write a book  that explained why.

In the summer of 2018, I sat down with a sheet of A3 and a set of coloured sharpie pens and plotted out a work that identified significant challenges to humanity in our time, along with the solutions that are currently evolving from the hearts and minds of some of the most extraordinary people on earth.

It didn’t take long before my big piece of paper was divided into four sections: the  changing nature of wars fought in our time, the emergency of microbial resistance, the threat to our food supplies, and our increasing reluctance to deal with the reality of death.

And then I began to add in the detail of each subject I wanted to follow up. I started to read the relevant scientific journals to see where  the cutting edge was to be found, and who was working there.

Some were, conveniently, colleagues at Imperial College London. Others were further away, but when they could get to somewhere with functioning WiFi, they all gave me more journal references and more subject matter experts to follow up with, and best of all, encouragement.

The sections were getting pretty full by the time I started to think about the historical context of each challenge and what they meant for the humans who endured them in previous centuries. Linking the past and present in this way requires absolute precision with language to ensure a continuity of meaning.

So I designated single words, in no particular order, but carefully chosen to represent each section under consideration: war, disease, famine and death. And when I next sat back and looked at my page, there were hoofprints winding their way through the words.

And Horsemen on the horizon. By the autumn of 2018 a plan became a manuscript that I could talk about and be reminded that everyone knows the Horsemen. Support came along with questions about whether I was going to keep the original identities or swap some out for more current challenges faced and generated by human beings.

Other books and dramas had retired the second Horseman, Pestilence, and promoted an entirely new member, Pollution, to represent the damage done by climate change. I thought about it but by the winter of 2018, I was certain that the Horsemen I sensed were the original four, with their original (English language) names: War, Pestilence, Famine and Death.

Ancient dangers that always underly newer threats, yet to be resolved. In January 2019 Pestilence ambled to the front of the group, selected a single arrow from his quiver and drew his bow in challenge.

As I write this, in the spring of 2021, the challenge is being met, at very considerable cost to humanity, but the second Horseman is being forced to back down for now. I ended up making a work that linked the past and the present and a future whose immediacy has never seemed greater. It required precision, care and four mighty iron-shod symbols of the dangers we face and the potential we have for eventual resolution.

The Four Horsemen and the Hope of New Age is published on 6th May 2021 in all good bookshops.