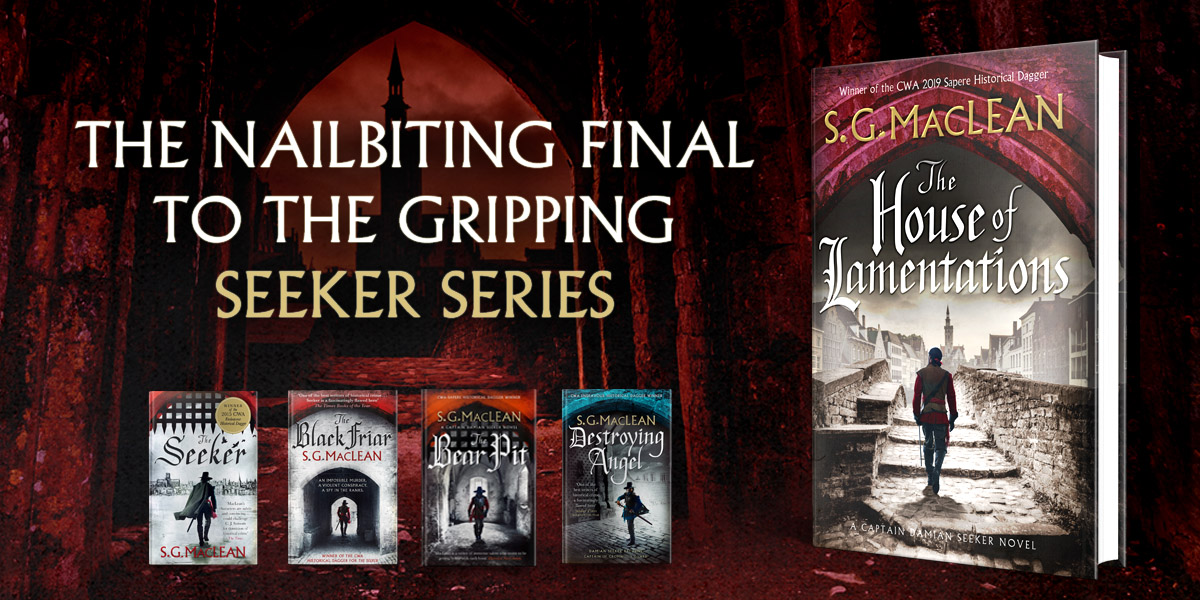 With The House of Lamentations, the final in the Damian Seeker series by S.G MacLean publishing this week, they reflect on what it’s been like to write this award-winning series.

As The House of Lamentations, fifth and last of the Damian Seeker series approaches paperback publication, it seems strange to think that only 8 ½ years ago the character didn’t exist in my head or anywhere else, and now I feel that he’s a presence that will always be with me.

It was in the early winter of 2012 that I was considering my next move after the fourth book in my Alexander Seaton series, set in seventeenth century Scotland. My publishers were keen that I should set a book in London, but it became clear to me at an early stage that Alexander Seaton simply would not go to London, and if I wanted to carry writing, certainly with this publisher, I was going to have to come up with something else.

The spark for that ‘something else’ came as I watched a documentary on seventeenth century London, and learned about the arrival of the first coffee house in the city in the early 1650s. To me it was a revelation – the London coffee house of the 1650s, where characters from all sorts of walks of life could meet, smoke a pipe, imbibe the new intoxicating brew and exchange news and gossip in a world obsessed with both, in a milieu peopled by Royalist plotters and Cromwellian soldiers and intelligence agents, seemed the perfect place to set a murder mystery.

Initially, I envisaged a series of books featuring a group of characters centred on my fictional Kent’s coffee house on Birchin Lane and, naïve as I was, there was no Seeker. It was only when I was discussing the book with my editor and she said, ‘Now, you’ll need to think carefully about your detective character,’ that I realised I needed one at all. A few hours later, over the course of a walk through misty Highland woods on a damp December afternoon, Damian Seeker was born. I sometimes wonder how the gruff Yorkshireman would have turned out had he first popped into my head on a beautiful June morning instead.

The first book, The Seeker, did centre on that Birchin Lane coffee shop, although I unaccountably decided that I would send him to Oxford as well in the course of the investigation, thus committing myself to intensive study of not one but two cities I really didn’t know well at all. I have now read about, mapped and walked both to a degree that I feel quite a strong personal attachment to them.

The idea for the second book, The Black Friar, came to me while consuming coffee and a scone in a bookshop café in Inverness. I wanted to set a mystery around a series of significant objects found in places they should not have been. I focussed, once more, on London. The books had been set in the Cromwellian period purely because that’s when the coffee houses first arrived in the city, but that setting in time dictated the dual nature of the plots – there would always be a murder investigation running in parallel with historical developments or events, and the years of the Cromwellian Protectorate were absolutely full of them. To provide the historical framework to The Black Friar, I chose the radical religious sects which attained such prominence in the period, and looked particularly at the role of women preachers within them.

After two books in the quite intense setting of London, I felt Seeker and I needed a change. I had decided, on that first misty woodland walk in December 2012, that he would be a Yorkshireman. Walking those same woods in late summer three or four years later, I was fascinated by the funghi springing up everywhere and decided I would have a book where someone was poisoned by mushrooms. This led to me thinking I wanted to see how Seeker would operate within the confines of a rural society. Sending him home to Yorkshire for Destroying Angel would also allow me to explore and bring up to date aspects of his past. The historical timeline had now reached the time of the Major-Generals, when England and Wales were to be placed under military rule and power redistributed within localities. I thought combining these elements would allow the mystery and characters to develop in a quite different kind of book. My research trips to York and the North York Moors were hugely enjoyable, the North York Moors helping me really open up the character in a way I hadn’t been able to do in London, and the treasures of the city of York offering one plot idea after another.

It was back to London for The Bear Pit, and rather than focussing on the city, the story took me across the river to Southwark and Lambeth and whole new areas with histories to explore. The subject matter and location for the book was suggested to me by the co-incidence in one year of the Protectorate’s shooting of the last bears on Bankside and a series of outlandish assassination attempts on Cromwell. A significant part of the book took place around the Tradescants’ garden and Cabinet of Curiosities in Lambeth, and it was a delight to visit the Garden Museum in the church where they worshipped, and the Ashmolean, where some of their treasures remain on display. In London, I loved that the street my hotel was on, the rather prosaic ‘Park St’ had, in the seventeenth century, been called ‘Dead Man’s Place’.

And so, at last, to The House of Lamentations and the Flemish city of Bruges. Throughout the books, Seeker had been beset by agents and plots emanating from Royalists in exile abroad. As the Protectorate began to crumble, it was time to send him to the heart of enemy territory. In Bruges, he comes face to face with some old adversaries. His final confrontation with one in particular, and the ending I gave him, is what I had planned for him from almost the beginning. 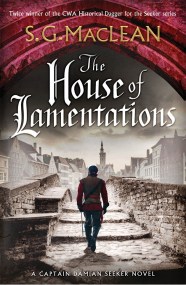 The House of Lamentations

'One of the best historical crime series out there' Crime Review

Summer, 1658, and the Republic may finally be safe: the combined Stuart and Spanish forces have been heavily defeated by the English and French armies on the coast of Flanders, and the King's cause appears finished.

Yet one final, desperate throw of the dice is planned. And who can stop them if not Captain Damian Seeker?

The final gripping book in this acclaimed and award-winning series of historical thrillers. Will Seeker's legacy endure?