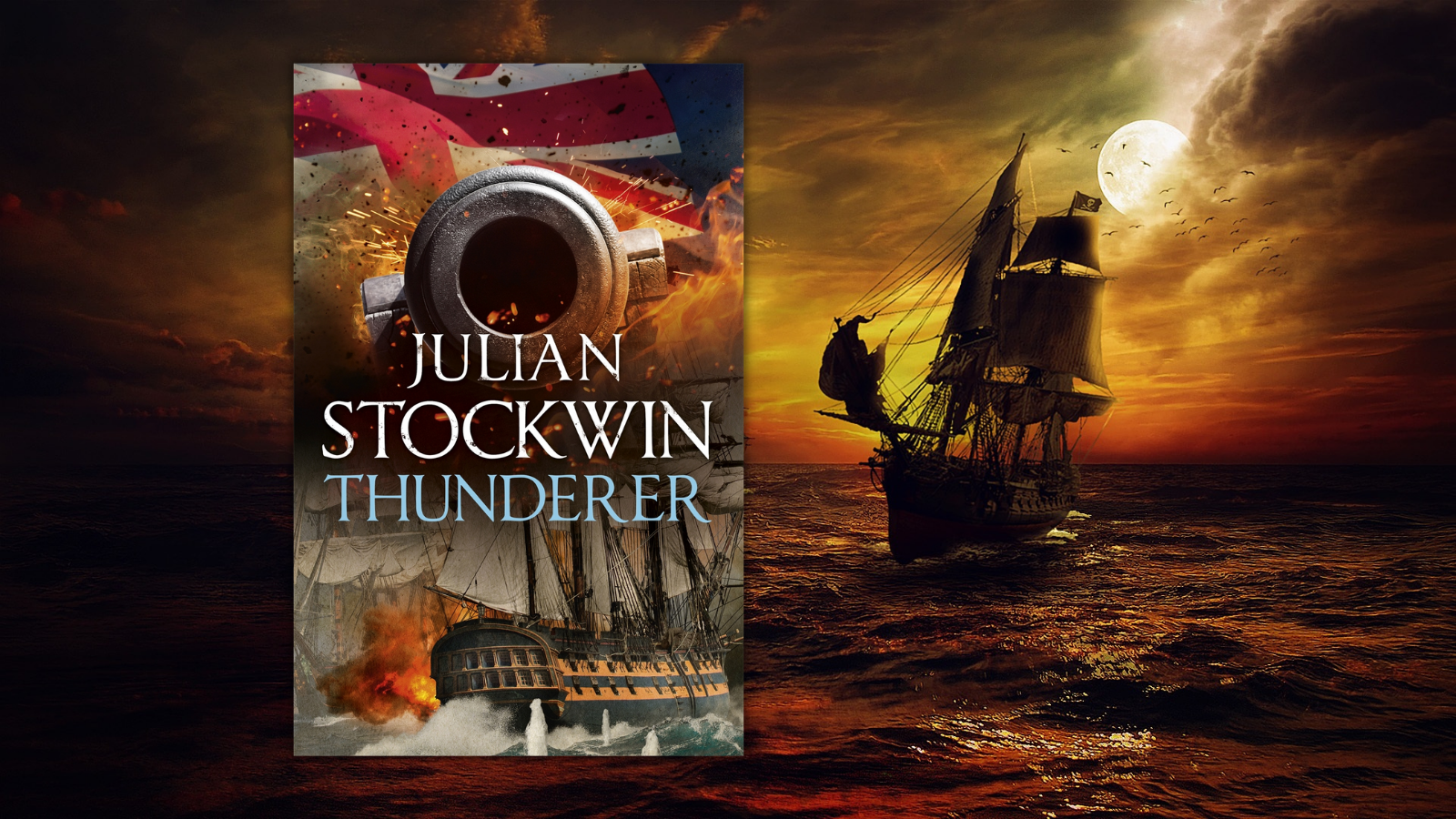 In some ways it seems but a blink of an eye ago that KYDD, my debut novel, was published,  the start of Thomas Paine Kydd’s journey from pressed man to Admiral in the Great Age of Fighting Sail. I well remember the glorious launch party held in the august reception hall of Admiralty House, Whitehall, the former official residence of the First Lord of the Admiralty.

Now, 24 books later (and with more titles in the pipeline), I feel very privileged to have undertaken this literary journey. Location research has spirited Kathy (my wife and literary partner) and myself around the globe, from the Americas to the Mediterranean, Asia to Australia. We have seen much of Kydd’s physical world – and met hundreds of readers and booksellers who share our passion for this fascinating period in history.

The next book, THUNDERER, is a major landmark in the Series as Kydd finds himself captain of  a 74-gun ship-of-the-line, a necessary step to the chance of eventually hoisting an admiral’s pennant.

The sheer magnitude of a ship-of-the-line was deeply impressive. A yacht’s two-inch belaying cleat translates in a 74 to a man-high fitting; her sails all set abroad could be measured in acres; and her guns were each one the heft of two or three family cars!  And if you stepped aboard it was possible to pace around her decks for miles before repeating yourself. A squadron of sail-of-the-line in line-ahead was a majestic and breath-taking sight, its war-like splendour never to be seen again after the vanquishing of Napoleon Bonaparte.

But ‘Thunderer’, his new command, is old, and being part of a standing fleet his chances of fame and distinction are slim indeed. And, as well, Kydd finds himself facing a hostile ship’s company, aggrieved at what they think was Kydd’s role in the displacing of their former captain.

In the course of research for this book, I became fascinated with the momentous events playing out on the global stage at the time. The year 1812 is of course dominated by Bonaparte’s invasion of Russia, an event that held the world in thrall. The size of the horde that eventually flooded across the plains into Russia was not much less in number than the population of the largest city on the planet!

In England’s capital, the prime minister is assassinated and British fleets are hurriedly recalled to Portsmouth as a threat of disorder grows. At the same time Parliament learns of the vast size of Bonaparte’s invasion fleet amassing in coastal ports. News as well comes of a colossal French army of half-a-million but is the threat aimed at Russia or England? Or will Russia join with France to fall upon England in an unstoppable wave?

Nicholas Renzi, Kydd’s former shipmate and now a grand noble, is caught up in the ramifications of Bonaparte’s dreams of global domination and is sent on a secret mission to St Petersburg to discover the mind of the tsar. He’s soon embroiled in palace intrigue but manages to win the confidence of Tsar Nicholas, a mystical and autocratic figure who’s driven by impulses buried deep within the Russian psyche yet eager to take his country out of its medieval torpor. His fascination with the west led him to trust foreign savants, such as Renzi, in preference to his own faction-ridden and often ignorant tribe.

At the tsar’s urging, Renzi must persuade Kydd to undertake a dangerous mission to thwart French plans to capture Riga, a vital part of Bonaparte’s battle strategy.

As an aside, the history of our own time would be very different if this all-powerful and autocratic Romanov had held on to the liberal administrator Sperkansky and adopted his plans for the liberation of the serfs and so forth, almost certainly heading off the bloody revolutions of a century later.

As events on land reach their terrible climax, Renzi joins Kydd aboard ‘Thunderer’ in a vital convoy of hundreds of naval and merchant vessels. A terrible storm falls upon them that challenges both ships and men to the extreme.

In my own time at sea I experienced several great storms and even with the massive horsepower  of a modern warship I have to concede to feeling both awe and fear when confronted with Neptune’s fury.  That of course is magnified many times in a wooden vessel under sail.

And as a postscript, let me address readers who will cry, ‘Have you written Stirk and his shipmates out of the Series?’ Most certainly not! In this tale I didn’t want to make it easy for my hero in his elevation, but in future books you will be making their re-aquaintance … with a twist.