Songwoman is the second instalment in my fictional exploration of Iron-Age Britain. It continues the story told in Skin, but it also stands as its own autonomous beast, more historical, more militaristic, perhaps a little darker. And so it should be, as it narrates the brutalisation and destruction of something very precious.

Songwoman is set in the wild and mythological landscapes of ancient Wales. It enters history at a decisive moment in the Roman colonisation of the indigenous British tribes—the pursuit of a powerful rebel king who history calls Caratacus. I call him by his Welsh name ‘Caradog’ and Songwoman tells his extraordinary story.

There is scant detail about this man in the Roman record, but what there is, suggests a most charismatic and determined leader. Caradog was a tribal prince who commanded large areas of south east Britain. Having fought the Roman army as it first landed on British shores in 43AD, he then fled to the forests, from where he activated a network of rebellion and led a successful guerrilla war against the Roman army for nine years. Caradog was able to do what no native leader had ever done: unite disparate British tribes into combined fighting forces.

A powerful Roman general, Scapula, was brought in to subdue Caradog but, despite Rome’s far superior military technology, could not catch him. It was as if the mountains and forests themselves were keeping him safe. By 50AD, his infamy had spread to the far corners the Roman world. He was the most wanted man in the Roman Empire. You’ll have to read the book to find out what happened next.

The rope of Songwoman is woven from many strands of research, spanning archaeology, the Roman histories, and native mythology of ancient Wales. Chief among my sources was the work of Dr Gwilym Morus-Baird in Wales, who is a scholar of indigenous British mythology and an expert in the performance techniques of the Welsh bards. Through his teaching, I encountered the wild and hallucinogenic stories of Britain’s earliest literature, such as the Mabinogion and The Book of Taliesin. Their hybrid creatures and dense symbolism have infused my book.

I was also greatly influenced by the ideas of fellow Australian writer, Dr Lynne Kelly, who recently published book called The Memory Code. Lynne conceptualised a ground-breaking theory of how pre-literate societies used objects and landscape as memory aids for vast systems of oral knowledge. Her work makes perfect sense of the seemingly mysterious monuments of the ancient British landscape. Her ideas helped me understand how my characters might have spent their days.

Many people ask me why I, (an Australian), write about the Roman invasion of Indigenous Britain. Perhaps I am not writing about Britain, but about my own country, and the attack on our own First People’s sovereignty, an act which continues to define and diminish us.

I do not suggest that these two stories are the same—clearly they are not—but it is my story-teller’s intuition that one can throw a light on the other.

Australian writer and philosopher, Professor David Tacey, suggests that non-Indigenous Australians need to turn to the stories of their own spiritual heritage in order to begin to understand and respect the mythologically-based Aboriginal worldview.

In the case of European-descended Australians, this means digging deep, deeper than our Judeo-Christian tradition, which may be too dried out, too conscious or institutionalised, to foster spiritual renewal. Activating the indigenous archetype may mean activating lost or repressed ‘indigenous’ elements within European traditions.

But the challenge is to stimulate the mythic possibilities in one’s own psyche, rather than to parasitically draw on others.

By gazing back into my own spiritual heritage through writing this book, I have, indeed, come to appreciate more keenly, what exactly is at stake as I live and write on the stolen land of the world’s oldest continuing culture.

Fragmentary archaeological remains, and tantalising glimpses of written history tell us that pre-Roman Britain was an immensely rich and spiritual culture, deeply animistic, highly mythological and steeped in an imminent sense of ‘the otherworld.’ It was a culture mediated by highly-trained men and women of oral learning and ritual—the druids—whose mysterious persona still fascinate us two thousand years later.

Unlike the spiralling, abstract art of ancient Britain, whose meaning has been entirely lost to us, the rich, symbolic knowledge of Australia’s ancient history is still alive, still breathing, still forming. There are still people who live by it and can share what it means.

This strikes me as indescribably valuable.

Recently I walked the Lurujarri Trail in remote Western Australia: a nine-day walk through country led by Traditional Owners, who told us the stories of the land as we walked for many hours along the coast and, again, at the campfire each night. They only shared what was public, not restricted knowledge, but even this was an awakening to the mythic richness of landscape that I had never experienced before. Even in this short time, my understanding of the meaning of ‘country’ was altered.

If only this kind of teaching and cultural sharing happened all over Australia. If only it was compulsory in schools and universities, if only we stood more humbly and receptively before the knowledge of our First People. Songwoman is my attempt to honour the knowledge of Britain’s First People.

This makes Songwoman sound perhaps more serious than it is. In fact it is a romp, a saga, a sword-swinging, tunic-ripping tale that celebrates the joy of being alive and in love, and the power of the human voice.

It has been an immense privilege to write it and I hope you enjoy reading it. 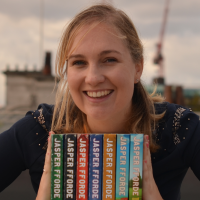 Books related to this article

A stunning historical novel and the sequel to the critically acclaimed Skin, per…

A thrilling historical novel of one woman’s journey to protect her people, perfe…