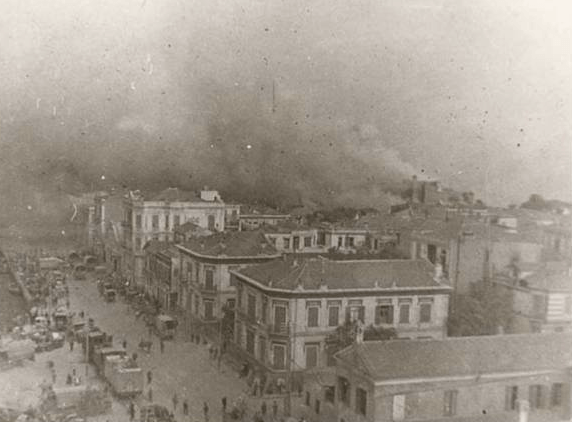 The first historical event I remember learning about at school was this:

It had been a very hot summer, with no rain for weeks.  A fire broke out in small shop, and within hours a huge area of the city had been destroyed: 13,000 homes, 87 churches and a huge cathedral.  Soldiers blew up buildings to make firebreaks but only when the strong winds died down, could the fire be contained.  It smouldered for days.

This catastrophe caused huge economic problems and homelessness.  And there were plenty of conspiracy theories over who started it.

There were plans to rebuild the city to look like Paris – with piazzas and avenues – but for economic reasons this did not happen.  The rebuilt city was, however, a big improvement on the old.  With houses made of brick rather than wood, wider streets and better hygiene.

A new city rose from the ashes of the old.

The city I was learning about was not Thessaloniki.  It was London.  And the year was 1666.  I think the similarities between the history that I grew up with – and my first reading about Thessaloniki’s fire made a big impression on me.

[The similarities between the two events are uncanny – it had been a very hot summer in Thessaloniki in August 1917, the fire began in a poor quarter of the city in a refugee’s house, there was a very strong wind that helped the fire on its destructive path through the city, thousands of houses were destroyed along with churches, mosques and synagogues, firebreaks were created to try and contain the conflagration.  The damage to the economy of the city was catastrophic and recovery was slow.  The city that eventually rose from the ashes was designed by a French architect, Hebrard, – with wide boulevards and piazzas (even though it was not possible to realise all the details of his plans)]

The idea of how something better can emerge from a catastrophe is always a hope that we must cling on to.  And I think that this is definitely the case for both our cities.

I fell in love with Thessaloniki on my first visit and sensed that the past is still very much present in today’s city.  All the layers of its history are still visible even on a short walk around the city.  On my very first stroll from the seafront towards the old town, I saw something from every century – from Roman to the present day.  There are very few cities where you can do that.

For me this was very inspiring.  When the past/history is discernible in architecture, I believe we keep some kind of connection with the people who lived in those previous times and centuries.  It is easier to imagine their lives and indeed to make up stories about them.

In The Thread, a very wealthy family lose their seafront mansion to the fire.  They lose their wealth and their business.  This family has to move for some time to a very small house where they find new opportunities and make friends with people who they would not otherwise have met, both Moslem and Jew.  From this beginning, their lives are altered.  They are, in fact, improved even if not economically.

The Great Fire of Thessaloniki destroyed such a huge part of this city, but not all.  It was a catastrophe and yet it provided an opportunity that allowed regeneration.

And this sense of continual improvement continues even into the 21st century.  In my eyes, both London and Thessaloniki are true living cities.  They seem to improve all the time.  In the past ten years, for example, in both cities, new and beautiful paths have been built along the waterfront, creating wonderful walkways and spaces for both residents and visitors.

Thessaloniki itself is a character in The Thread – it is not just a backdrop.  The story I wrote was very much a story of place and could not have happened anywhere else.  When I read about the city’s history I could see that the Fire was the first of a series of massive upheavals that very few places have suffered – and the drama of the fire was a very dramatic moment with which to begin the story.  Researching the impact of the fire on the city was not difficult.  I have a big collection now of big books with black and white photographs – the before, the during and the aftermath.

After the Fire followed the huge population exchange, occupation, genocide, dictatorship, earthquake.  To name but a few events.  For London it was a gap of 300 years between the huge fire and the Blitz when much of London was destroyed by the Germans.  The events that took place in Thessaloniki, however,  – fire, occupation, earthquake etc. all of these happened within 60 years!  What a city of drama.  What a tale of survival.

The Thread is available now