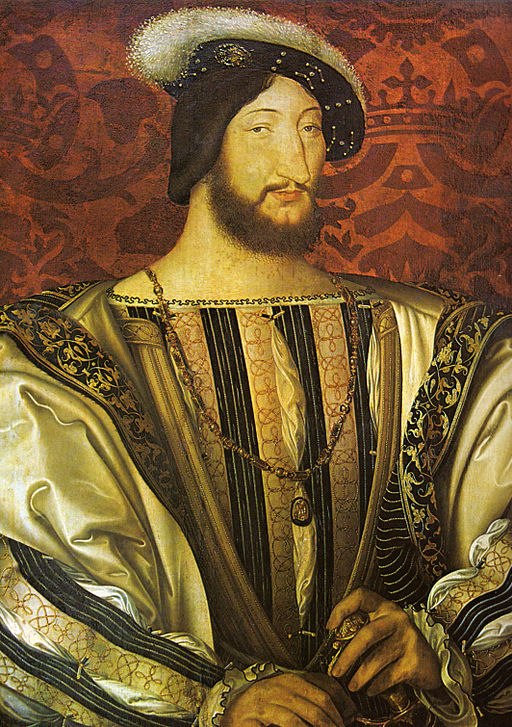 The background to The Chateau of Briis is the court of the sybaritic and notoriously licentious King François I, who epitomised all the ideals expected of, and admired in, a Renaissance monarch. Anne Boleyn spent her formative years there.

François was twenty-one when he succeeded to the throne in 1515, shortly before Anne arrived at his court. He was an impressive six feet in height, and broad-shouldered with an athletic physique and slim legs, although already he was putting on weight. He was considered handsome, with his dark, saturnine looks and long Valois nose, his cynical eyes and sensual, mocking lips, and he was undoubtedly attractive to women. A contemporary described him as ‘young, mighty and insatiable, always reading or talking of such enterprises as whet and inflame himself and his hearers’. Cultivated, intelligent, artistic and extravagant, he was spirited, cultivated and a brilliant, merry and witty conversationalist who had impeccable courtly manners and boundless ambition. To his contemporaries, he exemplified all the kingly virtues.

He had lost his virginity at fifteen, and thereafter was ‘all fire and flame for the ladies’. Married that same year, he grew fond of his wife, the patient, plain, plump and crippled Claude de Valois, and treated her with respect, yet seems to have regarded her chiefly as a dynastic brood mare. He was serially unfaithful, yet his amours were rarely affairs of the heart; he loved women in two ways, for sex and for their beauty, of which he was a connoisseur.

François presided over a magnificent court, one of the great centres of European culture and civilisation, but it was soon to become a byword for debauchery. The young King himself set the tone. He was habitually ‘clothed in women’, considered whoring a daily sport on a par with hunting, and boasted of his special ‘petite bande’ of courtesans and, from 1518, several maitresses-en-titre in succession – an arrangement that would have horrified his prudish contemporary, Henry VIII. François also indulged in numerous casual affairs with various ‘sweethearts’, drinking ‘from many fountains’. Anne’s own sister, Mary Boleyn, was probably one of these fleeting fancies. A notorious voyeur, François commanded spy holes and secret doors to be made in his palaces, so that he could watch women undressing and making love. He himself declared that ‘a court without ladies is like a year without springtime, or a spring without roses’.

The French court might have been one of the greatest cultural and artistic centres in Christendom, but English observers often professed themselves shocked at the lax morality that prevailed there. Gallantry was the order of the day, with ‘rejoicing and entertainment’, but promiscuity reigned. ‘Rarely did any maid or wife leave that court chaste,’ wrote a contemporary. One of François’s princely relations commissioned a gold cup engraved inside with an image of a couple having sex, and he would watch with prurient interest as the lady he fancied drained it to reveal the erotic relief, and await her reaction. The King’s own almoner, a priest called Buraud, felt obliged to apologise to his mistress for having satisfied her only twelve times in one night, claiming it was the fault of a medicine he was taking.

François I, as we have seen, was notorious for his amours. From 1518, his maitresses-en-titre would preside publicly over his court, attracting much comment. In an era in which few courtiers commissioned portraits of themselves – the number painted by Jean Clouet, for example, was modest – several of these mistresses had theirs done to mark their elevation to the royal bed, among them Françoise de Foix, Dame de Chateaubriant; Marie de Langeac, Dame de Lestraunge; Marie de Macy, Dame de Montchenu; Anne d’Heilly, Duchess d’Etampes; and Marie d’Assigny, Dame de Canaples.

In 1512, Louise of Savoy, François’s mother, had written to a correspondent that her son had a disease in his private parts, which had fortunately been cured, almost certainly by the administration of mercury, which was the standard remedy for syphilis at that time. An old tradition had it that François caught it again from a later mistress, La Belle Ferroniere, but that is a fabrication dating from the seventeenth-century, when the story was put about that the lady’s cuckolded husband, Le Ferron, deliberately got himself infected with the pox so that his wife would pass it on to the King. In the 1600s, that legend was spun around a famous portrait of a woman by Leonardo da Vinci, now in the Louvre.

Syphilis was first recorded in 1494 when a French army occupied Naples, and it was soon rampant throughout Europe, particularly in the higher ranks of society. The Italians naturally called it ‘the French disease’ – the French, of course, called it ‘the Italian disease’. Most people referred to it as ‘the great pox’; the name syphilis was not used until 1530.

According to some lurid accounts, François I died of syphilis in 1547; others, more convincing, state that his last illness was a disease of the urinary ducts. An autopsy showed that he had a stomach abscess, shrunken kidneys, decaying entrails, an abraded throat and one shredded lung. These conditions are not typical of syphilis, even in its later stages; there had been, for example, no mention of the mental disorders associated with the disease, nor do François’s later portraits show any collapse of the bridge of his nose, which can be eaten away by it. Thus, after 1512, there is no evidence beyond rumour that François I had syphilis, or that he was ‘known to be heavily infected’ with it.

Anne Boleyn served in the household of the virtuous Queen Claude. To be appointed to serve the Queen was a high honour, as competition for places in her household was fierce, and it is unlikely that Anne would have secured hers without having displayed the kind of qualities that the young Claude – and, more importantly, her formidable mother-in-law, Louise of Savoy – admired. It was here that she spent her formative years, in company with nearly three hundred other well-born young ladies.

Anne’s life in Queen Claude’s household was probably quite dull, for it was like living in a nunnery. She was expected to follow the Queen’s example and conduct herself modestly and decorously, and her days were governed by an almost conventual routine of prayers and good works. Above all, she was expected to guard her chastity.

Claude’s life had been difficult. A cripple, she had been lame from birth, yet she was constantly pregnant during these years. Her husband was unfaithful to her, and she was dominated by her mother-in-law, Louise of Savoy. Because she was ill at ease in the hothouse atmosphere of the court, Claude preferred to reside mainly at the beautiful chateaux of Amboise and Blois in the Loire Valley, and on the rare occasions when she was obliged to go to court, she kept a watchful eye on her female attendants, knowing that they were a likely prey for every predatory male there. And yet there were those who escaped their mistress’s vigilance. Was Anne one of them?

ANNE BOLEYN: A KING’S OBSESSION is out in paperback