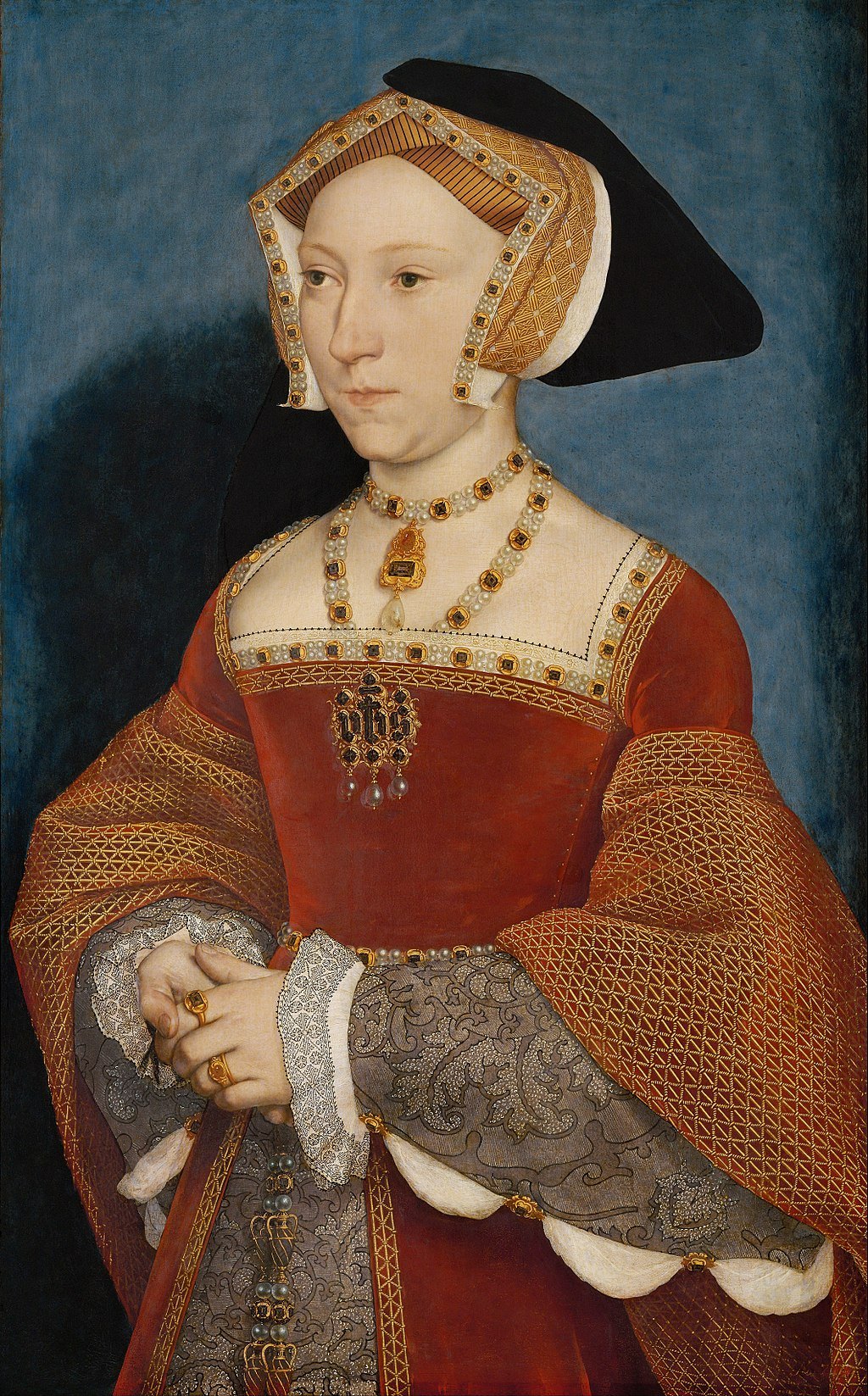 The wives of Henry VIII were served by a hierarchy of female attendants, mostly of noble and gentle birth. These were the women who resided with her in her private apartments – a chaste female enclave within the King’s ‘house of magnificence’. The Queen’s lodgings normally consisted of a presence chamber (throne room) for audiences and entertaining; and a privy chamber, which, like the King’s, might comprise bedchambers, closets, a privy, a privy wardrobe and sometimes a privy kitchen, where the Queen’s meals were prepared. Guards were stationed at the entrance to each room, and only the King, the Queen’s servants and the most privileged guests would be admitted to her privy chamber.

Most members of the Queen’s household were men; the women who served her kept her company or attended to her personal needs.  Her life was governed by ceremonial and ritual, even in private. She was rarely alone; there was always some woman in attendance or within earshot. These were the women whom the Queen saw daily, in whose company she spent much of her life, and who might, with luck, become her friends. They had to be congenial to her, and virtuous, for their conduct would reflect upon her.

It was Katherine of Aragon’s custom to read aloud from pious works to her ladies after dinner. She expected her ladies to behave as decorously as she did, and forbade any vain amusements in her household. Anne Boleyn gave each of hers a little book of prayers and psalms that could be hung from a girdle. In order to prevent them from getting into mischief through idleness, she made her women devote hours of their time to sewing garments for the poor, for her to distribute while on progress.

Jane Seymour too was determined to enforce high moral standards in her household. She laid down strict rules governing, not only the behaviour, but also the dress of her attendants: her ladies were to be sumptuously, but modestly attired and had to wear trains three yards long and girdles set with a regulation number of pearls. One girl was told that a girdle embroidered with 120 pearls was not sufficiently grand to wear before the Queen.

Places in the Queen’s household were much sought after, for they provided women with status, an independent income as well as perquisites, pensions for good service on retirement, and privileged access to their mistress – and sometimes to the King himself – from which could flow the lucrative benefits of patronage. Effectively, they were career women, and if they were as efficient as they were well connected, then they could look forward to years in royal service.

Foremost among these female attendants were the ladies-in-waiting, or ‘ladies-of-honour’, married women who waited upon the Queen. Some were there because their husbands served the King in his Privy Chamber. Katherine of Aragon had eight ladies-in-waiting – their names are a roll call of the Tudor peerage. By Anne of Cleves’s time, the number had been reduced to six, who were now to be called ‘the great ladies of the household’. Impeccable courtesy, discretion and social skills would have been expected of them and, indeed, of all the women and girls who served the Queen. They had to have ‘a vigilant and reverent respect and eye’, so that they might notice by their mistress’s ‘look or countenance what lacketh, or is her pleasure to be had or done’.  The ladies-in-waiting were her constant daily companions in her privy chamber; they attended her at court functions, on ceremonial occasions and in private, and their function was to provide pleasant and decorous companionship at all times. Often they were feted along with her, by the King and his gentlemen.

Ladies-in-waiting were required to be accomplished in dancing, singing, playing musical instruments and the other pastimes usually enjoyed by noble ladies. They might be called upon to play games of chance, dice or cards. They were allowed to keep singing birds. Dancing was often practised in the Queen’s chamber in preparation for court entertainments, or just for its own sake. The ladies would also have been diverted by the antics of the Queen’s fool, who might be female. The young Henry VIII and his gentlemen liked to dress up and disguise themselves – sometimes in the strange costumes of other lands – and then come upon the Queen and her ladies unawares, dance for her, or perform other scintillating feats, and then disclose their identity, ‘whereat the Queen and her ladies were’ – invariably – ‘greatly amazed’. When the King was not present, the Queen would usually dine with her ladies in her presence chamber.

Every married woman in the Queen’s train was expected to put their mistress’s needs before those of their family, for royal service meant spending long periods at court. Time off was allowed for confinements, but once the baby was established with a nurse, the mother would return to court.

Next in rank after the ladies-in-waiting came the maids-of-honour, unmarried, well-born girls who were often appointed on the recommendation of ladies-in-waiting, or through the influence of their relations or friends at court. Katherine of Aragon had thirty maids-of-honour. The usual age for appointment was around sixteen. Since the late fifteenth century, beauty had been a prerequisite, since it would enhance the appearance of the Queen’s entourage, and attract suitable husbands for the girls in question. A Venetian observed that Katherine of Aragon’s ladies were ‘handsome, and make a sumptuous appearance’. In 1520, however, a Mantuan envoy wrote disparagingly of the looks and attire of the ladies of Henry’s court, and asserted that they drank too much.

Ambitious parents would compete to place their daughters in the Queen’s household, for she and the King were better placed than anyone to arrange advantageous marriages for them, upon which they might be promoted to the rank of lady-in-waiting. Maids-of-honour were therefore expected to be uncompromisingly virtuous, for their mistress was in loco parentis, and no scandal could reflect upon her name. Yet some considered the ladies of the English court to be of easy virtue. In 1536, the Spanish ambassador was sceptical about Jane’s Seymour’s much vaunted chastity: ‘You may imagine whether, being an Englishwoman and having been long at court, she would not hold it a sin to be still a maid.’

In his later years, Henry VIII was often to be found ‘feasting ladies’ and enjoying their company. He even raised three maids-of-honour to the rank of queen, demonstrating to ambitious families that service at court offered unique opportunities for young women.

Next down the scale, after the maids-of-honour, were the Queen’s chamberers, who performed the more menial tasks. They made her bed to a prescribed ritual.

Also residing in the Queen’s household, but not in her service, were the daughters and gentlewomen of her ladies, many of whom made good marriages through living at court. All the women attendant upon the Queen and her ladies received accommodation and board at court, as well as stabling for their horses. As well as their salaries, they were given new liveries and clothing at Christmas and Whitsun, and for coronations, royal weddings and funerals. They also received gifts from the King and Queen at New Year and at other times, often in recognition of good service, and if they were lucky they were granted annuities and pensions, which could be quite substantial.

The Queen’s female attendants would have dressed her, for help was essential, given the elaborate clothing worn by high-ranking ladies of the period. Queens were not expected to perform even personal tasks for themselves, so her women also washed and bathed her, and attended her when she used the privy or close stool, wiping her with a clean cloth afterwards. It was taken for granted that body servants, who were required to be of gentle rank, would be in attendance even for the most intimate of functions.

All the Queen’s ladies were expected to be expert needlewomen, as much of their time was spent working with costly materials and threads of silk and gold, embroidering altar cloths, hangings, bedding and garments, or sewing clothing such as fine shirts. These might be given as New Year’s gifts.

Much time was devoted by the Queen and her ladies to making, mending, embellishing or trying on clothes. In an age of outward display, appearance counted for much, and it was expected of them that they enhance the splendour of the court by the resplendence of their attire. Elizabeth’s ladies were required to dress almost as lavishly – and expensively – as she did: despite strict sumptuary laws restricting the wearing of certain materials to certain ranks, their dress was to reflect their employer’s status rather than their family’s. The rich materials and long trains worn at court reflected the wealth and status of their wearers, for such fabrics were costly. Needless to say, it cost a lot to equip a girl for royal service.