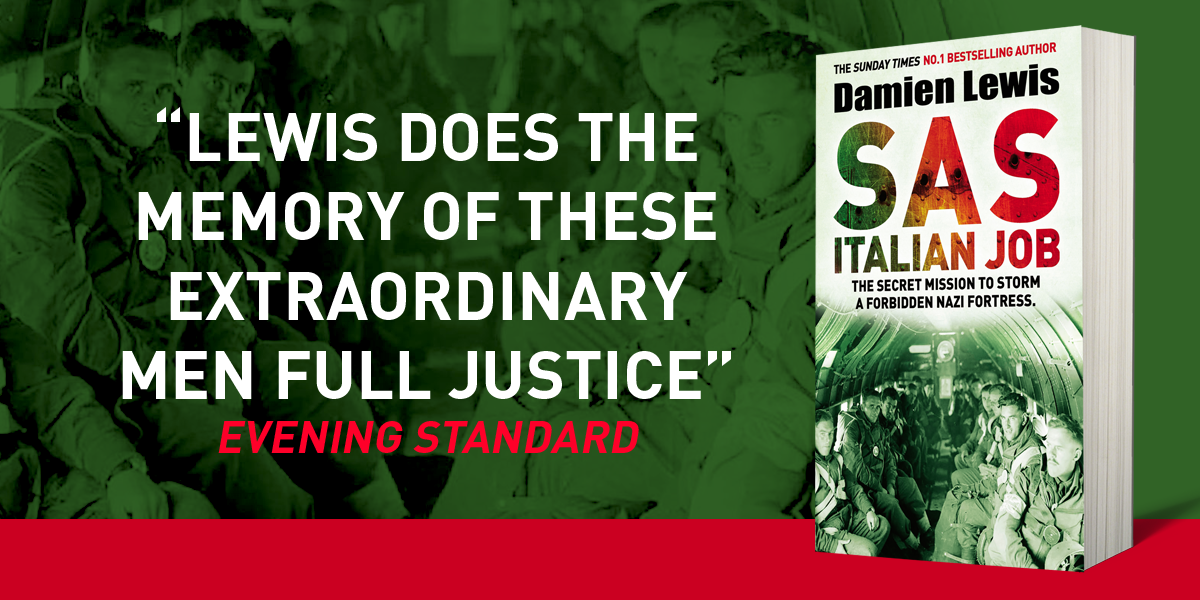 The men of the Special Air Service (SAS) have a reputation for being able to endure anything, but every human body has its limits, a point where being able to continue when the “tank is empty” seems impossible. In March 1945, Major Roy Farran, commander of a crack unit of SAS warriors and rag tag Italian partisans, found himself and his men in that very position …

Fresh from a daring assault on the German 14 Army Headquarters, in Northern Italy – where they’d given the Nazi’s a real bloody nose – they found themselves on the run deep behind the lines. They needed to cover much ground to escape from a vengeful enemy, one hungering for blood to avenge the deaths of their comrades …

Their escape route required them to march as quickly as humanly possible for 48 hours straight. That, combined with the time they had already been awake, and the toll the actual assault had taken, would seem to make it a herculean task beyond reason. At first buoyed by the memory of a German officer trying to “see them off” dressed in nothing but his pyjamas and gun, the sure-footed march became a slow trudge into exhaustion. As time wore on, the adrenaline rush of the audacious against-all-odds mission wore off, victorious smiles and laughter fading into silence.

If they didn’t up the pace, they were in danger of being trapped inside the German search perimeter with no escape. Major Farran knew they couldn’t fight their way out if they had a “contact” with the enemy. Their weapons had been dropped in the mud too many times as they stumbled, and even this battle-hardened group of desperadoes couldn’t go without sleep indefinitely. If the enemy caught them, it would end up with them being all put against a wall and shot. This was do or die time.

The legendary SAS commander did have one last trick up the proverbial sleeve. Stashed in their gear in tiny pill form was … Benzedrine. More often known as ‘Bennies’, this was an Amphetamine more commonly found in London’s glitzier nightclubs than a Second World War soldier’s kit. But for the SAS, state-sanctioned drug-use to aid in the waging of war was as common as being issued a rifle and bayonet.

Benzedrine was created in 1933 as a decongestant and went on to be marketed as one of those wonder drugs that could treat a wide variety of things, from narcolepsy – a sleep disorder – to obesity. But one of the unexpected side effects was the feeling of excess energy and euphoria it induces. Those who took it found they had the ability to do more in one day and for longer. What they were taking was essentially the Class A drug we now refer to as ‘speed’. The military soon took notice. As General Montgomery remarked, “[the] consciousness-altering properties of the drug made men fight harder, and the men liked it.”

War and drugs have a long and varied history. Vikings used mushrooms to turn themselves in to the legendary Berserkers rampaging through villagers like the wild animals. The Napoleonic War was fought on a steady diet of strong drink, giving credence to Wellingtons “scum of the earth” comment about his own men. During the Zulu war of 1879, the Zulus used a concoction of psychedelic mushrooms and cannabis to enable them to march at speed over long distances, earning the reputation that they were bulletproof.

Now, with World War Two, the SAS were issued with Benzedrine tabs theirs in their escape kits, to keep them on their feet in extremis. Of course, the Germans had their own equivalent. They even had slang term for it: Panzerschokolade (“Tank-Chocolates”). Methamphetamine was created by the Nazis in 1937. It was extremely powerful: as well as keeping a soldier on his feet, it lead to extreme violent behaviour and was highly addictive. It’s the drug that the Western viewing public were exposed to most recently in the TV show Breaking Bad.

What’s sauce for the goose is sauce for the gander: Major Roy Farran and his SAS were only doing as the enemy would. But even Benzedrine could’t solve all the problems that fatigue brings. These men had to dig deep and show the mettle that had gotten them into the ranks of this fabled regiment in the first place. Laden down with those wounded on the raid – men like SOE Captain Mike ‘Wild Man’ Lees, who had been shot five times and had begged to be left for dead – that would only slow them down. But the SAS had refused to abandon Lees, carrying his fourteen-stone form using a ladder as a makeshift stretcher.

Eventually, the decision was made to hand their wounded to the resistance, to give those still on their feet a fighting chance. Trouble piled on trouble, as the sole mule that had done the heaviest lifting collapsed with exhaustion, and had to be abandoned. Maybe it too should have been fed some bennies. After walking for 24 hours straight, they had been awake for more than 48 hours,  fought a pitched and murderous battle, and walked several marathons. As they approached the village from which they had set out two days earlier, comparative safety beckoned. They were still well behind the lines, but they were entering a partisan stronghold deep in the mountains.

Farran decided to give the locals a fitting show on their way in. These grizzled men, plastered in mud and wracked with exhaustion, popped a final pill and managed to squeeze a last ounce of energy from leaden limbs: they formed up and marched that final leg as if on a parade ground. They did so to the sound of Highland Laddie echoing across the valley, as David ‘The Mad Piper’ Kirkpatrick, a daredevil bagpiper, lead their return – triumphant, exhausted and more than a little high!

You can read the full story of this amazing feat of human endurance and of how these men took on the might of the German army in their own back yard and won, in my new book, SAS Italian Job.