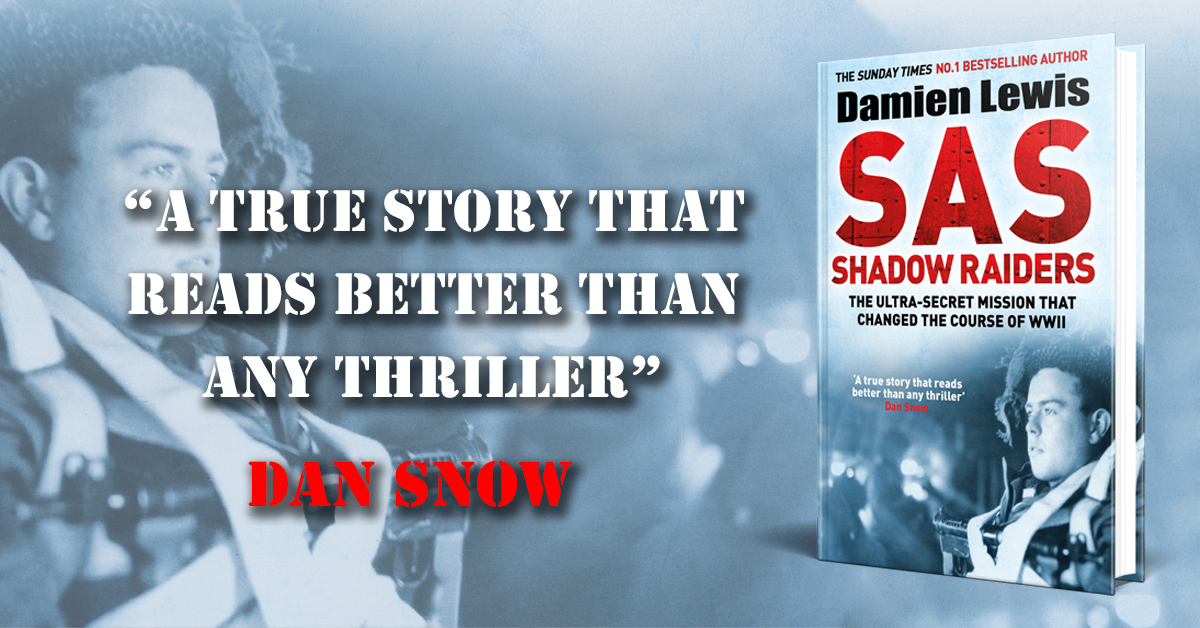 In my new book, SAS Shadow Raiders, I reveal the lost history of the SAS’s earliest beginnings – how they were formed a year before accepted history tells it, and how they carried out the Allies first, most audacious and daring airborne raid – codenamed Operation Colossus. In the immediate aftermath of Dunkirk, maverick yet visionary commander Colonel Dudley Clarke dreamed up the idea for forming the Commandos, a concept for which he won Churchill’s enthusiastic backing.

Clarke modelled this most British unit on the Boer War Commandos – the informal volunteer bands of South Africans, who struck in lightning, hit-and-run attacks – of which both he and Churchill had direct personal experience. Churchill had been captured by the Boer Commandos during the Boer war, pulling off a daring escape, and Clarke had been surrounded by their forces, in the 1899 long siege of the South African city of Ladysmith. Both had seen at first-hand how effective such fast-moving, guerrilla-warfare type operations could prove.

Clarke sought a very certain type of recruit to form his Commandos. ‘We looked for the dash of the Elizabethan pirate, the Chicago gangster, and the Frontier tribesman,’ he remarked. They would need to be self-starters and independently minded, so they would press on to their objective no matter what might have befallen their fellows.

Within weeks of the British Commandos formation, Clarke’s raiders embarked upon Operation Collar, the first cross-Channel attack, proving, as Churchill had exhorted, that at her darkest hour Britain still had the will to strike back at a seemingly omnipotent Nazi foe. Riding in RAF crash boats – air-sea rescue craft designed to pluck downed pilots out of the sea – the fledgling Commandos raided German sentry posts along the French coast, off Le Touquet, in the Pas-de-Calais region.

A communique was issued to the press, which was both bullish and refreshingly honest: “Landings were effected at a number of points and contact made with German troops. Casualties were inflicted and some enemy dead fell into our hands. Much useful information was obtained. Our forces suffered no casualties.”

In light of such successes, Clarke was charged to form an airborne commando, to complement his sea-borne forces, for Churchill was convinced that airborne operations would prove crucial to winning the war. As all Commandos were volunteers, they were known as the Special Service volunteers. To differentiate his airborne unit, Clarke inserted the word ‘Air’ into the name, and so the ‘Special Air Service’ (SAS) – and a legend – was borne.

In February 1941, 36 men of this fledgling SAS would carry out Britain’s first ever airborne mission, codenamed Operation Colossus, a daring raid on an aqueduct in Italy. Now all-but forgotten, Operation Colossus had the personal backing of Winston Churchill, who doggedly believed that airborne forces were vital to winning the war. Colossus was to be proof of concept, and the stakes could not have been higher, the mission more audacious and risk-laden.

Dreamed up by an Oxford professor of classics seconded to the Special Operation Executive (SOE) – more commonly known as ‘Churchill’s Ministry of Ungentlemanly Warfare’ – the aim was to blow to pieces an aqueduct channelling water from Italy’s Apennine Mountains to the vital naval ports of Brindisi, Bari and Taranto, depriving them of the water that kept three million souls alive.

Churchill personally signed off on the order, which in effect aimed to kill by thirst millions of Italians, plus the German soldiers serving in their midst.

On 7 February 1941 Britain’s fledgling airborne forces embarked on a fleet of ageing Whitley bombers flying 1600 miles through enemy airspace. The 34 SAS parachutists – aided by two fiercely anti-Fascist Italian SOE agents – leapt into combat laden with weaponry and explosives, on a mission of spectacular daring and heroism, but one that would be marred by dark betrayal.

Against all odds, the Colossus raiders blew up the aqueduct. But Allied reconnaissance photos shot from high-flying aircraft some forty-eight hours after the attack seemed to show that it was still intact. The Colossus saboteurs, commanded by the rock-solid Major Tag Pritchard – an Army boxing champion – had blown up the piers that held the aqueduct, so severing the water’s flow. Yet the photos shot from 10,000 feet failed to reveal that they had done so.

Colossus was duly reported to London as being a ‘failure’, those in high command concluding – erroneously, of course – that the thirty-six raiders had been captured, before they could reach their target.

As a result, the submarine HMS Triumph was recalled from her top-secret mission, to pluck the raiders off the Italian coastline and to spirit them to safety. Major Pritchard and his 36 men – only one of whom had been injured and left behind during the attack – were abandoned to their fates. All were subsequently captured or killed.

Months later, their champion, Dudley Clarke, was posted to Cairo, charged to form a deception force to convince the enemy that British airborne troops were operating in North Africa, when in truth they were not. When Clarke met David Stirling, Stirling proposed forming a deep-desert raiding force, whereupon Clarke counselled him to use the name the Special Air Service, to give greater body to Clarke’s own lies.

So it was that Stirling adopted the name ‘SAS’ plus legacy of a unit that had been operational for more than a year.

SAS Shadow Raiders is out now!

The recounting of the ‘lost’ history of Operation Colossus and of the founding of the SAS has been hailed by Colonel Tim Collins, former commander of the SAS, as; “One of the most important Special Forces books ever written. It traces the daring, ingenuity and sheer courage that is the foundation of the modern service.”

Former SAS operator and Channel 4 former Who Dares Wins personality, Colin Maclachlan, has described the book’s revelations thus: “Another masterpiece of impeccable research that tells the story of how my predecessors in the SAS that changed the course of WWII.”