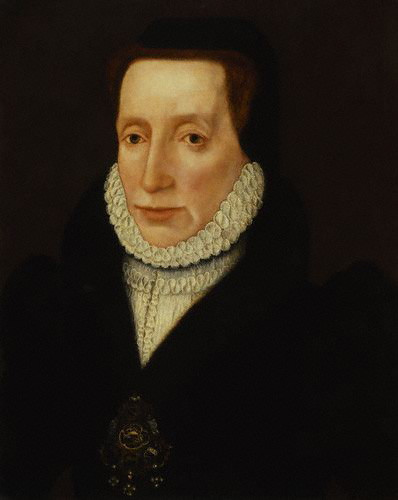 Royal Tudor blood ran in her veins. Her mother was a queen, and she herself was the granddaughter, niece, cousin and grandmother of monarchs. Some thought she should be queen of England. Beautiful and tempestuous, she defied her uncle, Henry VIII, creating scandal by indulging in two illicit affairs, yet survived to serve five of his wives. A born political intriguer, she was imprisoned in the Tower of London for a total of four years. Her scheming helped to bring about one of the most notorious royal marriages of the sixteenth century. Lady Margaret Douglas, Countess of Lennox, was a prominent and important figure in the Tudor age, and yet today she is largely forgotten. Her story deserves to be better known.

Margaret’s mother was Henry VIII’s sister, Margaret Tudor, eldest daughter of Henry VII and widow of James IV of Scots. After James was killed at Flodden in 1513, Margaret, an impulsive, passionate character and a constant storm centre – think Henry VIII in a dress – took a second husband, Archibald Douglas, Earl of Angus. Margaret Douglas was their only child. Born at remote Harbottle Castle, Northumberland, in 1515, she had a claim to the English throne, but was excluded from the succession in 1544 when England was at war with Scotland. Nevertheless, she remained a dynastic threat to the Tudors, especially Elizabeth I, who hated her.

The child of a broken marriage – about which Henry VIII, of all people, had much to say, for he disapproved of his sister’s marital tangles – Margaret was brought up first in the household of her aunt, Mary Tudor, Duchess of Suffolk, and then in that of her cousin, Henry’s daughter, the future Mary I, to whom she became close. Later Margaret became a lady-of-honour to Anne Boleyn. But in 1536, just after Anne Boleyn’s execution, it was discovered that Margaret had secretly, without the King’s permission, precontracted herself to Lord Thomas Howard, a younger brother of the Duke of Norfolk. The errant couple were imprisoned in the Tower and sentenced to death by Act of Attainder, for Henry was convinced that Thomas coveted his throne. This Act – the first ever to legislate on royal marriages –- expressly forbade any member of the royal family to wed without royal assent in future. Thus, Margaret and Howard were condemned retrospectively under a statute that had not been in force when they committed what was now a capital offence.

But Henry VIII was fond of Margaret. He spared the lovers the death penalty and contented himself with keeping them in the Tower. Their love poems still survive as a poignant reminder of a doomed romance, for Thomas died in prison, of a fever, in 1537. Margaret had just been pardoned, but she too had become gravely ill, and the King sent her to Syon Abbey to recuperate.

Yet Margaret failed – as she often did – to learn a lesson from her experiences. In 1541, she again incurred Henry’s wrath when she had an affair with Charles Howard, brother of Katheryn Howard, the King’s fifth wife. This time, because Henry was so shocked at the discovery of Katheryn’s sexual crimes, Margaret was fortunate to escape with a reprimand and, when the Queen’s household was disbanded, she was sent to the Duke of Norfolk’s house at Kenninghall, Norfolk, accompanied by her friend, the Duke’s daughter, Mary Howard. There Margaret stayed for about two years.  In 1543 she attended Henry VIII’s wedding to Katharine Parr, and thereafter she was one of Katharine’s chief ladies-in-waiting.

In 1544, determined, in the face of Scottish resistance, to bring Scotland under Tudor rule by marrying his son Edward to the young Mary, Queen of Scots, Henry arranged for Margaret to marry the handsome and cultivated Matthew Stewart, Earl of Lennox, a Scottish exile in England. Lennox had betrayed his country by offering his allegiance to the King, and had promised to capture Dumbarton Castle, which Henry regarded as the key to conquering Scotland.

This arranged marriage turned into an enduring love match. A pendant, the Lennox Jewel – probably given to Margaret by Lennox – survives in the Royal Collection, its symbolism encapsulating their love and devotion, and their dynastic hopes. Sadly, of their eight children, only two survived infancy: Henry, Lord Darnley, and Charles, who would succeed his father as Earl of Lennox. Through this marriage Margaret, a determined intriguer, became deeply involved in Anglo-Scottish politics.

Under Mary I she emerged as a staunch Catholic, and was prominent at court. Queen Mary, her good friend, wanted Margaret to succeed her instead of the Protestant Elizabeth, the bastard half-sister whom Mary feared. But Parliament would not hear of it. As soon as Elizabeth became queen in 1558, it became clear that there was no place for Margaret at court, so she retired to her houses at Temple Newsham and Settrington in Yorkshire, which became centres of Catholic intrigues. Margaret did not recognise Elizabeth’s title to the throne and was ready to subvert the new Anglican settlement. The enmity was mutual – Elizabeth feared Margaret, as she feared all her female relations of the blood royal.

Margaret’s chief aim was to marry her son, Lord Darnley, to the Catholic Mary, Queen of Scots, a plan to which Elizabeth was naturally opposed. For her plotting, Margaret endured a long spell under house arrest at Sheen, and she was sent to the Tower when Darnley rode north in 1565 and married Queen Mary without Elizabeth’s permission. Margaret remained in prison until 1567, when Darnley was murdered in Edinburgh, aged just 20, and Elizabeth released her out of compassion.

Distraught with grief, Margaret denounced Mary as a murderess, but, for all their efforts, the Lennoxes never succeeded in bringing anyone to justice for their son’s murder. Yet, by 1572, Margaret had come to believe in Mary’s innocence, and the two women were reconciled. To the end of her life, Margaret would remain convinced that Mary’s third husband, the Earl of Bothwell, was the culprit. She never found out who really murdered Darnley. Ironically, it was one of her own Douglas kinsmen.

In 1570 Margaret’s husband Lennox went north to Scotland and was appointed regent for their young grandson, James VI, the son of Mary and Darnley. But Lennox’s rule proved controversial, stirring up old feuds, and he was assassinated in 1571, leaving Margaret devastated with a grief that was described as ‘poignant and perpetual’. Her remaining son, Charles, was out of control as a teenager, and in vain did she beg the Queen’s chief minister, Lord Burghley, to take him into his household and instil some discipline in him. Instead, Burghley found the boy a tutor, who saw great promise in the boy and curbed his youthful excesses.

Even now, Margaret was busy scheming. In 1574 she combined forces with another arch-intriguer, the formidable Bess of Hardwick, to marry Margaret’s heir, Charles, to Bess’s daughter, Elizabeth Cavendish, which inevitably provoked Queen Elizabeth’s wrath. Off Margaret went once more to the Tower, but she was soon released. After Charles died in 1576, she devoted her energies in bringing up her granddaughter, Arbella Stuart, in whom were now vested all the Lennox claims to the throne.

Margaret died in 1578. Shortly beforehand, she had dined with Queen Elizabeth’s favourite, Robert Dudley, Earl of Leicester, and it was claimed that he had poisoned her, which seems unlikely. Elizabeth begrudgingly allowed Margaret a state funeral, and she was buried, fittingly, in Westminster Abbey, where a fine tomb, adorned with her painted effigy and weeping figures of her eight children, had been built in her lifetime. Later, Mary, Queen of Scots was laid to rest in the same chapel.

Love had been the great blessing and the great curse of Margaret’s life.  As she chose to put it, her sojourns in the Tower had all been ‘not for matters of treason, but for love matters’. Like her cousins, she was a victim of Queen Elizabeth’s animosity towards her female heirs; like them, she was imprisoned, but – unlike them – she was freed, and managed to retain her position at court through four turbulent reigns, a lucky survivor in the brutal world of sixteenth-century politics. Furthermore, she died in her bed, not by the axe like Lady Jane Grey or Mary, Queen of Scots, or in prison like Lady Katherine Grey; and she lived out what her contemporaries would have seen as her allotted span. Perhaps that is why her story is more obscure than theirs – and why it needed to be told.

It was the Imperial ambassador Chapuys who referred to her as ‘the princess of Scotland’. It is true that she was treated royally at the English court, but she was not a princess at all, either of Scotland or England. 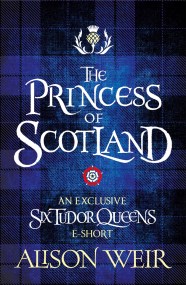 The Princess of Scotland

The Princess of Scotland is an e-short and companion piece to Katheryn Howard: The Tainted Queen, the compelling fifth novel in the Six Tudor Queens series by bestselling author and historian Alison Weir.

'The King would not approve of my falling in love ... My marriage was in his gift'

Brought up in the magnificent castles of Scotland under the storm of her parent's turbulent marriage, Margaret Douglas is well-acquainted with the changing whims of those who hold power. And when her father is exiled by King James V, Margaret is sent to England to seek refuge with her uncle, King Henry VIII.

Margaret is an asset to Henry, who plans to use her eligible marriage status for his own advantage. But, surrounded by the excitement and indulgences of the English court, will Margaret be able to resist the temptations of a young admirer? As she well knows, keeping secrets from the King can be a dangerous game...