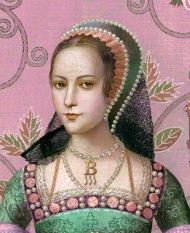 This engraving by Wenceslaus Hollar, dated 1649 (above right), is not – as has long been accepted – of the unlabelled British Museum drawing by Holbein (above, left), which is popularly identified as Anne Boleyn, and has been the subject of much academic debate. But, as I was stating on Facebook that the drawing was probably not Anne, I noticed that the engraving is clearly of a different portrait, and Hollar states beneath that Holbein drew it. No such Holbein is known. The discrepancies are obvious. The sitter is facing a different way, for a start. The jewellery, hood, neckline, bodice and sleeves are different. It was not Hollar who inscribed the drawing ‘Anna Bullen’ sometime after 1650, but probably someone who had seen Hollar’s engraving (or one of its numerous copies) and assumed it was the same portrait; but Hollar did label his engraving ‘Anne Boleyn, Queen of England’. It’s often said that Holbein must have drawn or painted Anne, so it is possible, even likely, that Hollar did copy a lost drawing of her by Holbein. If so, the lady on the right is Anne Boleyn. And, that being so, given the close similarities in the features, the British Museum sketch, also by Holbein, is almost certainly her. There are four known portraits after the Hollar engraving, all called ‘Anne Boleyn’. Three, painted in the nineteenth century, are in private collections; the other is a late-seventeenth-century version in the Uffizi Gallery, Florence.

ANNE BOLEYN: A KING’S OBSESSION by Alison Weir is out now in paperback