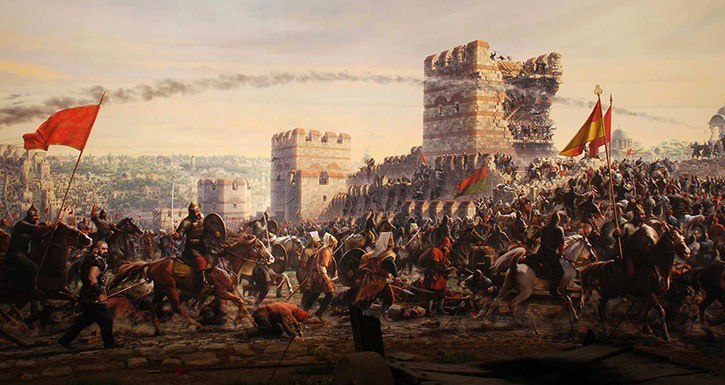 There have been longer sieges, there have been ones involving bigger armies and worse slaughter, but none have been so dramatic and consequential as the fall of Constantinople in 1453.

The siege didn’t last very long- just 53 days- and the armies numbered perhaps 50,000 Turks and 7,000 defenders. But it while it lasted, the whole world held its breath. And when it was over, the world had changed forever.

Why was it so important? Partly it was symbolic. The Roman Empire had stood for 1500 years, its capital first in Rome, then Constantinople. For half that time, the city had been the front line against Islam, enduring two terrible sieges in the 7th and 8th centuries that had turned back the Mohammedan tide.

Constantinople was, quite simply, the greatest and most fabled city in the world with walls impregnable to assault. But by 1450, once mighty Rome was reduced to a single city with a population reduced from half a million to 50,000, its palaces and churches crumbling and much of the land within its walls given over to field and orchard. Worse, cannon had been invented and they were getting bigger every year. Constantinople could no longer depend on its walls for protection.

Then there was the ambition of kings. The Koran had called for the fall of Constantinople and the new, unpopular 19 year-old Sultan, Mehmed II, badly needed a victory to secure his throne. Meanwhile, the Roman Empire had produced one of its greatest emperors in its hour of need: Constantine XI, a man determined to win or die.

The siege was presaged by three actions by Mehmed that broadcast his ambition. First, he built a castle on the Bosporos, nicknamed ‘Throat-cutter’, that sealed off Constantinople from supplies from the north. Next, he built a navy (helped by the Venetians who’d never let religion get in the way of profit). Finally, he commissioned two of the biggest cannon ever cast from the Hungarian gunsmith Orban, who’d first offered his services to Constantine but been sent away due to lack of funds. When the castle, ships and cannon were ready, Mehmed marched on Constantinople, pitching his tent outside its walls on April 2nd.  1453.

Constantine, meanwhile, had spent the winter buying in food from what was left of the empire and calling on the Christian powers for help. One man in particular answered the call: Giovanni Giustriniani Longo, a Genoese knight from the island of Chios, who raised an army of 600 mercenaries at his own expense. He was appointed commander of the city’s defence.

The siege itself was dramatic. The Turks made several determined assaults on the walls while its huge cannon blew great holes in them. But the attacks were beaten back every time and the walls repaired nightly by the women and children of the city, even the monks helping. The Turks dug tunnels to undermine the walls, but these were intercepted and destroyed. When the city was getting short of food, three Genoese round ships fought off the Turkish fleet to creep behind the safety of the chain strung across the mouth of the Golden Horn.

With his army despairing, Mehmed realised he needed to do something daring. So he built a road from the Sea of Marmara to the Golden Horn, then carried his galleys over it to face much the weaker sea walls. From then on, Constantinople was properly surrounded. Its fate was sealed.

The end came on the night of 29th May when the Turks made an all-out assault on the city walls. They broke through and, in the vicious close-quarter fighting, Giustiniani Longo was mortally wounded. Seeing this, the defenders broke and ran. The last Emperor of Rome died on the walls, fighting to the last in his white armour.

The sack of Constantinople went on for two days and the slaughter was very great. At last Mehmed brought it to a halt and made the city the new capital of the Ottoman Empire.

It’s difficult to overstate the effect on Christian Europe. This was seen as the great battle between good and evil (Constantinople perhaps providing the inspiration for Tolkein’s Minas Tirith, the Turks changed to Orcs), and it did seem that evil had triumphed. Not much stood between Islam and world domination.

In fact, of course, it was the start of the modern age. The fall of Constantinople closed much of the land trade routes to the east, so Europe started to look for new, sea-borne routes and new markets. The great age of Portuguese and Spanish discovery started in the second half of the 15th century and led directly to the age of European supremacy.

So we have much to thank the Romans for beyond aqueducts and films about gladiators. Perhaps its greatest glory came at its end.