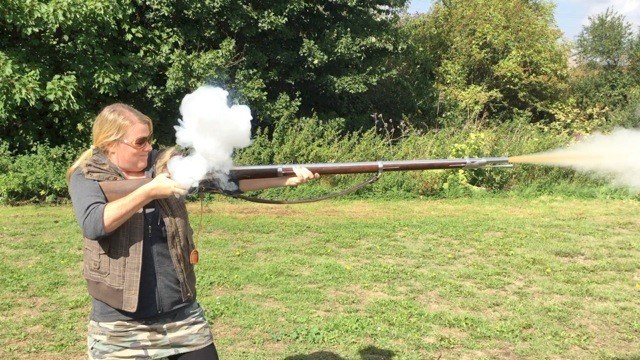 It’s a summer’s morning and I’m standing in a field with a gun in my hands – a flintlock musket from the English Civil War, long and heavy, the stock hunched into my shoulder, barrel aimed down the field.

I struggle to pull back the hammer, needing two fingers to do so.  It’s stiff and I’m nervous.  The pan is loaded with gunpowder and the flint is now poised above it.  I pull the trigger.  The flint snaps down, striking the powder to life with a flash, sending a rush of fire and force down the barrel with an ear-blasting crack.  Smoke erupts in my face. 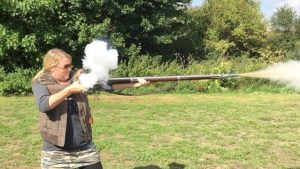 OK, so it’s not a gun from the period I’m currently writing about – late 15th century for my New World Rising series – but my friend who owns these weapons and the license to use them (yes, I have some helpful and slightly scary friends) wisely wouldn’t let me have a go with that one – the arquebus – which is basically a hand-cannon and could be almost as dangerous to those who fired them as the targets they were aiming for.  But this experience has given me what I needed: the sense of the weight and feel of a gun, the surprise of that long hiss down the barrel, the smell of dry gunpowder and the sulphurous tang of the smoke.

When I start a new novel my research takes several forms.  First, comes the reading.  I amass books on every aspect of the world I’m going to be writing about, from sweeping narratives on the crusades or the Wars of the Roses and biographies of my leading characters, to in-depth studies on medicine in medieval England and politics in Renaissance Europe, to trade routes and food, religious views and castle building.  I also make extensive notes, seek out useful articles and hunt down experts in subjects I expect to cover in detail.  The plot usually starts to take shape during this stage.

Once I have an idea of the characters who will inhabit the novel, the emerging storylines of my fiction and any major historical events I’ll be tackling, I try to visit the key locations.  For my new novel, Court of Wolves, that meant a tour of Westminster Hall, two trips to Florence and one mad dash around Andalusia.  Walking city streets, ramparts or battlefields in the footsteps of my characters has always been a vital part of my research process, whether I’m hiking the wilds of Scotland or trying to conjure ancient battle sites out of modern housing estates, winding my way up stone staircases in chilly Welsh castles or marveling at the glitter of Renaissance palaces.

But even with the intensive reading and note taking, the research trips and plotting, for some aspects of historical fiction – those physical things that are particularly hard to comprehend from a book alone – I’ve found it’s when you experience them for yourself that you find that little pinch of magic that helps bring the world to life.  Watching people fight with swords and seeing slivers of metal chipped from the blades as sparks.  Realising the enormous strength it takes to draw back a longbow (and what happens to your fingers if you don’t wear protective gloves).  Feeling for yourself the weight of mail dragging at your body or the claustrophobic encasement of a helm.  For Court of Wolves it was the guns.  For my Insurrection Trilogy, which follows the life of Robert Bruce during the Wars of Scottish Independence, it was horses.

After years writing about warhorses and heavy cavalry charges for the Brethren Trilogy, using knowledge from textbooks and the few experiences I’d had with these animals, I realised I was running out of ways to describe how they sound and smell, feel and act.  Horses were an integral part of daily life for most of my characters, whether for travel and farming, hunting, jousting or battle.  They were status symbols, vital work animals, military machines and beloved companions.  I’d been on a few basic hacks as a kid, bounced about like a sack of spuds, but I had never put a saddle or a bridle on a horse, or felt what it was like to gallop, and I’d certainly (thankfully) not experienced anything like my main characters would have – thundering into the storm of battle in full armour, or charging down the lists with a lance couched.

Another helpful friend – an expert jouster – put me in touch with the owner of a local stud in Sussex, who also happened to be a skill-at-arms instructor.  I spent several terrifying months in the paddock while I was researching and writing the trilogy, being taught to ride and shown some of the things my knights would have learned from boyhood.  When I was working on the Brethren Trilogy I’d written about men kicking the flanks of their mounts to make them go, until a woman who’d worked with these animals all her life wrote a friendly but firm letter about what would happen if you kicked a horse there – one of its more sensitive areas.  I relayed this to my instructor who proceeded to show me just how sensitive they can be, while I was sitting on one.  After discovering, several times, that the hardest thing about learning to ride is the floor, I limped from the stables, but I returned to my desk not only with a much deeper understanding of all things equine, but a newfound respect for these animals and the men who rode them.

For the Brethren Trilogy, I had a similarly enriching experience with falcons.  One of my protagonists, King Philippe IV of France, was fond of hunting with birds of prey, as many nobles of the period were.  Again, I had read the relevant books and knew the names of the equipment, understood how different hunts might be undertaken and what type of bird might be used.  But, again, it was difficult, from books alone, to get a sense of what these creatures sounded and smelled like; what it feels like when a bird casts from your hand or the rush of wings against your face as they return, or indeed the pain of a talon stabbing through your finger when you’re not paying attention.

After a day working with a local falconer, feeding and handling gyrfalcons and peregrines, eagle owls and kestrels, I ended up as hooked on the sport as my French king.  Later, I got to take a hawk on a hunt, watch a falcon in a 200 mph plunge and, for several years running, helped fly the birds at a medieval festival, where I spent the weekend living much as my characters would have – including drinking too much ale around the campfire.

**With heartfelt thanks to all my slightly scary friends, with really unusual jobs!

Court of Wolves by Robyn Young is published in hardback, ebook and audiobook on 9th August.